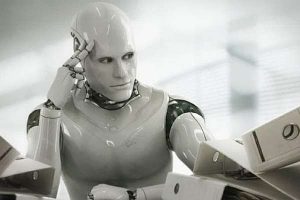 And what even is a robot anyway?

This is no joke.

The idea of taxing robots has been floated for several years on the back of fears of armies of autonomous robots displacing humans from jobs, decimating countries’ tax incomes and seeing the benefits of automation going to just a small portion of the population.

Microsoft founder Bill Gates fired up the robot tax debate last year, when he said governments could tax companies’ use of them. But he’s far from alone in pushing for the tax.

In 2017, South Korea introduced what was widely dubbed a ‘robot tax’ – in reality it was the reduction of a tax deduction previously available for industry automation equipment, while in last year’s French presidential elections, socialist candidate Benoît Hamon made taxing robots part of his campaign (he was also pushing a universal basic income – or government handouts to all, as touted by the likes of Mark Zuckerberg, Richard Branson and Elon Musk – along with shorter working hours, and, his master stroke for future happiness, legalising cannabis).

“Why would you tax a company for using innovative technology to deliver services?”

Earlier this year the UK launched a review into automation and the future of work, including the question of whether a robot tax should be implemented to support those affected by automation.

But the head of one robotic process automation (RPA) specialist says his clients – and his company – are creating more jobs, and providing humans with higher value jobs, through use of robots and RPA.

Garry Green, founder and managing director of robotic process automation specialists, Quanton, says “Most of our clients, and ourselves, are creating more jobs than jobs being repurposed. They’re using robots for productivity increases to grow their business, to actually be innovative and do things in a new way.”

Quanton, which claims to have been the first company to deploy RPA in New Zealand and Australia, has customers across the financial sector, health, telecommunications and primary industries, among others. The company itself ‘employs’ three robots alongside its human workforce of 35 – a human workforce Green notes is growing rapidly.

The idea was also floated in New Zealand last year, though widely condemned, and in November 2017 the newly elected Labour-led government said it wasn’t considering a robot tax, but was monitoring how machines will affect jobs.

New Zealand’s Tax Working Group’s interim report, released in September, notes that while a robot tax has been proposed to replace lost taxes on wages as a way to address the problem of the automating firms transferring the costs of employment loss onto society and to counter resulting increased inequality, the Tax Working Group believes there are better ways to address the problems ‘if automation becomes more widespread in New Zealand’.

The European Parliament also toyed with the idea, before opting against it over concerns it would effectively be a tax on progress.

That’s a concern echoed by Green, who says “Why would you tax a company for using innovative technology to deliver services?”

He cites the example of the meat processing industry, which has been forced down the route of automation due to constant struggles to find staff.

“You’d penalise an industry like that if you taxed automated robots that are helping the industry deliver.

“And when you look at software robots, our clients are using automation to remove mundane tasks and use people in higher value activity, enabling their workforce to do higher value tasks and stuff they enjoy, which helps retention,” he says.

He notes that defining ‘robot’ is also a challenge: “Is it a name, a piece of software, a distinct functionality? It’s very difficult to define what it is.

Green says RPA is being deployed on both sides of the Tasman for a range of tasks.

“One of the first processes we automated was return mail where we had a client with a backlog of 140,000 return mail items and it was growing by 10,000 a month.

“They didn’t have the resource to deal with it so we used a software robot to clear the backlog and then deal with monthly volumes. It addressed a task no one was doing, or wanted to do, and means mail isn’t going to the wrong address.”

Hutt Valley District Health Board meanwhile is using RPA for electronic patient referrals. The systems used by the GPs and the hospitals don’t talk, so patient information for appointments was being moved manually – something that Green notes is risky and ‘hugely mundane’.

While Green is adamant robot taxes would do more harm than good, he does believe the thinking around policy needs a technology booster to keep up.

“The policy thinking is years behind the thinking of how to leverage this technology. There’s a lot of investment of intellectual horsepower that needs to go into this, not just around taxation, but around the implications of some of the emerging technologies and how they will be used.

“Technology on its own is not going to change the world. It’s how you change your business model, how you leverage that and integrate people with technology and use technology to augment people.”