Shopping VR comes to a head 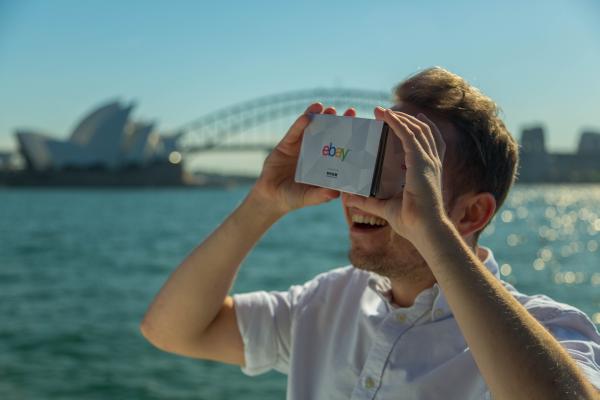 Announced last week the innovation uses smartphones, an app and free “shopticals” – essentially a lightweight head-mounted box that holds the smartphone. People put the box over their eyes and get a virtual reality style view of more than 12,500 Myer products that can then be purchased via eBay.

When the shopper sees something they like, they gaze at it and product details and cost appears on the screen. They can then just stare at the buy button to complete a purchase via eBay.

If it all sounds a bit far-fetched and fancy, that’s because it is. But like most other sectors retail is being disrupted by technology – albeit perhaps more slowly in Australia than overseas.

According to Mark Dougan, managing director of Frost & Sullivan, just 6.6 percent of all retail sales are made online in Australia, compared to 13 percent in the UK and 10 percent in the US. Part of the reason he said is that “Australian retailers are slow off the mark in offering an omnichannel experience”.

While the Myer-eBay initiative doesn’t exactly fall into the omnichannel category, it is a cutting edge application. It may also help head off a trend identified at a retail technology roundtable in Sydney last week, where Mark McGeachen, CEO of Advance Retail, said that there had been a 50 percent fall off in visits to physical stores over the Christmas shopping period over the last five years, as people switched to online alternatives.

But progress to stem the exodus was patchy. McGeachen said that currently the Australian retail landscape was characterized by “islands of automation and islands of service”.

There is appetite for reform however.

But McGeachen warned that in their eagerness to innovate “(information) security falls a long way down for retailers because they are trying to stay in business”.

In the eBay/Myer initiative the security aspects of any financial transaction will be handled inside the eBay platform which runs on the secure Amazon cloud.

But as David Higgins, regional director for WatchGuard in A/NZ noted, while financial data was important in retail applications it was “personally identifiable information from loyalty systems which is much more valuable then credit card information”. These are the sorts of issues retailers will have to address in order to engender consumer loyalty long term.

Whatever the risks Brad Drysdale, APAC CTO for MuleSoft said that retailers had to grasp the transformation nettle or risk being outflanked by the competition.

“The biggest threat is inertia. Sitting back and polishing the status quo won’t protect you from disruptors.”