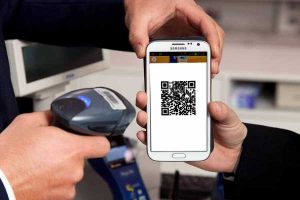 The new way to pay. No it’s not Facebook’s Libra…

Sure, it’s been slow to take off, but for all the anticipation that goes along with emerging fintech, it might just be the humble QR code that revolutionises the POS tech space.

There are a few good reasons to think so. While mobile wallet technology hasn’t gained the traction some expected (one report finds only a third of iPhone users having tried Apple Pay, the device’s in-house payment software), with established players like Samsung, Google and of course Apple entering the payments market, the mobile wallet looks to be making something of a comeback.

In fact new research from Juniper says half the world will be using digital wallet technology within the next five years. And why not? A payment method that reduces friction at checkout – and provide secure, quick transactions, with no physical card required – is surely the Holy Grail of POS systems.

And that’s where QR-code based payment systems come in. While QR tech has seemed to fade from the public consciousness in the last few years, there might be life in the old technology still: A few weeks ago it was announced that Alipay – the mobile and online payment spinoff from Alibaba – was working with six mobile wallet providers in Europe to create a unified QR payment platform. The move will bring together five million users and almost 200,000 merchant partners in Europe and significantly open up those merchants to Chinese Alipay users.

When it comes to QR code-based payments, China certainly leads the way. According to that above mentioned Juniper report, QR payments have already surpassed cash and cards in both instore transaction volume and value in China and digital wallet in-store payments alone (such as those using via QR code and NFC in general) account for around 30 percent of all consumer spend.

Now the technology is spreading (back) to the West. Franchise coffee multinational Starbucks has embraced the technology with gusto, with a QR-based wallet app which can be used in-store or online for preordering. The platform generates a QR code image on the customer’s mobile which is then scanned at POS to complete the transaction (and debit the funds from the customers account).

The result is reduced checkout times and, presumably, happier, more-likely-to-repeat customers. Starbucks says around 30 percent of its US transactions were conducted via the app by the end of 2017 (the latest available data), a 12 percent increase from four years’ earlier.

But the future likely does not belong to single-retailer, ‘closed’ mobile payments systems like Starbucks’ offering.

Earlier this month Australia’s New Payments Platform announced that it is working to bring QR code scanning to its national payment network.

“We want the NPP to support ground-breaking payments experiences that deliver the benefits of real-time payments to both consumers and businesses, and we want these experiences to be enabled by a broad spectrum of innovators such as fintechs, retailers, small and big businesses, as well as banks, building societies and credit unions,” says CEO of NPP Australia, Adrian Lovney.

Lovney says that the NPP QR Code Standard provides a single common code for payment solutions across multiple payment service operators, as well as the ability to facilitate payments among different payment schemes, such as e-wallets and financial institutions.

“We’ve seen similar implementations of QR codes in an interoperable way in real-time payment systems overseas such as Singapore’s FAST, and that’s something we want to emulate here in Australia,” Lovney says.

As New Zealand continues to pursue its Payments NZ-directed open banking initiatives – and with QR-friendly providers such as SmartPay and Choice entering the market – expect QR-based payment options to increase downunder.

According to that Juniper report, there’s more at stake than simple convenience – there might be an opportunity to do some good: QR-based payment tech offers a realistic point-of-sale platform for communities that don’t have strong traditional POS – or consumer banking – infrastructure.

“In India, QR code-based wallet payments spend at POS was around $22.3 billion in 2018, making it the second-largest market worldwide,” says Juniper.

“For the unbanked, it goes further, providing a means of financial inclusion, both as an alternative to cash payments and as a way of accessing services such as loans and savings accounts.”