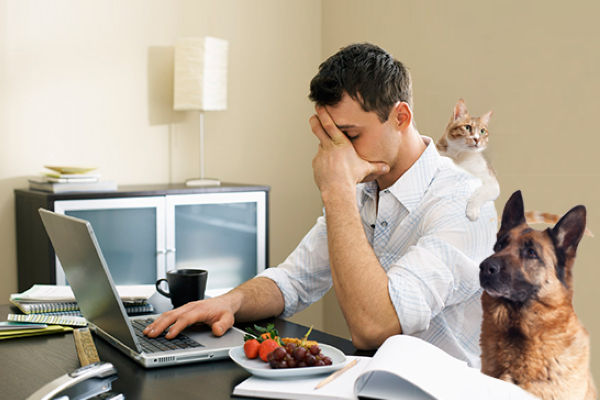 Back to the office you go…

The belief that work from home is boosting company productivity might just turn out to be a myth if a new report from Microsoft is to be believed.

There’s been plenty of discussion – and dare we say, hype – around the supposed benefits to productivity that Covid-enforced work from home has brought both businesses and workers. Many large corporates have embraced the WFH revolution, making remote work a permanent option for at least some of their staff. Others are less convinced. Earlier this year, Goldman Sachs CEO David Solomon dubbed remote working an ‘aberration’ – and one the investment bank planned to ‘correct as soon as possible’.

“We expect the effects… will impact productivity and, in the long-term, innovation.”

The Microsoft report published in scientific journal Nature, provides further impetus for that return to the office. It says while remote work might be fine for the day-to-day minutiae, ongoing remote work could be a real hindrance for innovation.

The report, which analysed data gathered from more than 61,000 US Microsoft employees, reveals that while hours worked went up slightly during work from home, communication, particularly real-time conversations, fell significantly.

“Not only were the communication media that workers used less synchronous, but they were also less ‘rich’ (for example email and IM).”

Those changes make it harder to acquire and share new information and to convey and process complex information. And that, Microsoft says, is a problem – and one that it believes will impact productivity and, in the long term, innovation.

“Previous research suggests that these changes in collaboration patterns may impede the transfer of knowledge and reduce the quality of workers’ output.

“We expect the effects we observe on workers’ collaboration and communication patterns will impact productivity and, in the long-term, innovation.”

For many of us, and certainly for Solomon, that won’t come as a surprise. He noted that for innovative, collaborative, apprenticeship cultures like Goldman Sachs, remote work ‘is not ideal’.

Microsoft admits there are limitations to its report – it is, after all, based on just its own employees over a short period of time. However, it’s cautioning businesses to look deeper into the longer-term impacts of remote work before making long-term policy decisions.

“During the Covid-19 pandemic, workers and firms have invested in the physical and human capital required to support remote work and innovation has shifted toward new technologies that support remote work. Both of these factors make it more likely that for many firms, some version of remote work will persist beyond the pandemic.

“In light of this fact, the importance of deepening our understanding of remote work and its impacts has never been greater.”

And Microsoft isn’t the only one casting shade on remote work’s benefits – for both businesses and individual workers.

Among those advantages are stronger connections and more spontaneous communications with colleagues – the very things Microsoft’s report is calling out as an issue for remote workers.

It also found that nearly half of employees said ‘productive’ and ‘undistracted’ were more likely to be traits describing on-site workers, and not remote workers.

ADP’s report favours a hybrid working model, saying that work part on-site and partly remote may provide workers with most advantageous characteristics of both on-site and remote working. (One US report suggested one day a week working from home could boost productivity by 4.8 percent.)

If more encouragement to head back to the office, at least part time, is needed, ADP’s report also suggests better career enhancement benefits too, with hybrid workers reporting they feel more visible, receive constructive feedback and that their growth is being supported by the manager.

For the many businesses in city centres around the world lamenting a loss of business thanks to less people working in the city, a return to the office – at least part time – may be just the (caffeine free) boost they need.