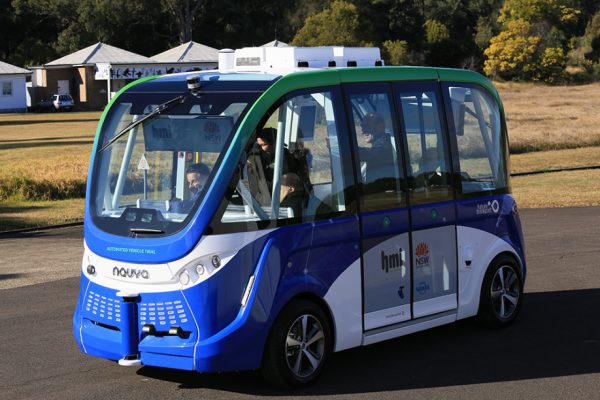 Autonomous vehicles may seem a distant dream on A/NZ shores, but Kiwi developer Ohmio believes we’ll see the ‘level 4’ autonomous vehicles taking on many public transport routes across the two countries within three years or less.

Just to be clear here, level 4 autonomous vehicles – a ranking set by the Society of Automotive Engineers – are not vehicles which can go driverless anywhere and everywhere. Instead, level 4’s while driverless, operate within very clearly defined, geo-fenced environments, such as running specific public transport routes.

As to Ohmio, while their name may not be that well known – yet – the company was spun out of HMI, a company with more than 20 years’ experience building intelligent transport systems, and already has vehicles plying the roads in Sydney and successful trials under its belt in Christchurch and Victoria.

Ohmio – that’s HMI with ‘wheels’ on each side – focuses on the robotics side of autonomous vehicles.

While big names like Google, Uber and Toyota are eyeing up the level 5 of autonomous vehicles (they’ll be ones able to operate without drivers and go anywhere), Ohmio is focused on level 4.

Mohammed Hikmet, HMI chairman, is bullish about the market for level 4 vehicles.

While it’s smaller than that for level 5 – a level Hikmet says is something of a dream state still five to 10 years away at least (“If someone manages to get that, they will replace every vehicle on the roads. Nobody wants to drive,” he notes) – he says it’s still a multibillion dollar market. And one that will likely merge with level 5 as time goes by.

In Sydney, a trial of Ohmio autonomous vehicles at Olympic Park has moved to a simple deployment with two vehicles operating on public roads after legislation changes.

“One of the biggest uses for Level 4 vehicles is first mile/last mile application – taking people from their doorstep to the train, bus or ferry station and then from those to the final destination,” Hikment says.

“It makes the service more convenient and takes you almost door to door. And there is demand for that. Residential compounds, amusement parks, hospitals and universities, places like that normally have a train or bus station nearby, but it can be a long way to the building. Getting on a shuttle like this, makes it much more convenient.

“At the moment these vehicles are filling a missing link, making public transport more efficient, rather than replacing anything,” he says.

“I would be very surprised if we don’t start to see public transport routes being replaced in the next three years or less, depending on how long the route is.

“The technology is there and there’s nothing that stops this being deployed. If you think about level 4, it’s a tram that goes on virtual tracks, so there’s the element of the driver being removed and huge costly infrastructure being removed as well.

“This is today’s technology. It’s something that is happening now.”

Indeed, a report on a trial at La Trobe University’s Bundoora campus in Victoria last year recommended consideration of use of autonomous vehicles in future infrastructure planning and investment decisions (along with more trials, it should be noted).

David Franks, CEO of Keolis Downer, which oversaw the Victoria pilot, said the project demonstrated that safety, technical, operational and community requirements could be met for successful deployment of autonomous vehicles.

“The pilot project provided strong evidence autonomous buses present a significant opportunity in the short term to meeting existing mobility needs and encourage more people on to public transport in Victoria and across Australia,” Franks says.

A Christchurch trial was also successful and Hikmet says Christchurch Airport now wants to order a vehicle, which is proposed to run between the valet parking and airport terminal.

Therein lies the slight sticking point at the moment: The manufacturing of the vehicles.

Hikmet says Ohmio wants to focus on the robotics, rather than making the actual vehicles. The company is in negotiations with several major potential investors and seeking a partner who can take on the manufacturing aspect.

Last year the company secured a US$20 million joint venture with the City of Heshan in China to distribute its Ohmio electric shuttles and a deal to establish a manufacturing facility in South China and is in the final stages of establishing the facility, with all R&D remaining within New Zealand.

“We are excited about this, but we are also looking for partners who can take care of the manufacturing of the vehicle,” he says.

Christchurch Airport’s new vehicle will likely be one of the first to be manufactured commercially for the company.

But Hikmet’s plans are far grander than just a big future for Ohmio.

He’s a strong believer that the New Zealand Government needs to get behind the autonomous vehicle sector to help create a world-leading industry locally.

“This is a brilliant opportunity for New Zealand to develop something where we could lead the world and there wouldn’t be much of a threat for it to be copied by someone else,” he says.

“In the 90s we lost all our vehicle manufacturing because they could be manufactured somewhere else much cheaper.

But, while New Zealand has the talent, he says there’s still a lot of work to be done.

When China was looking at investing in Ohmio, the company ‘ticked all the boxes’ for investment: An electric vehicle, autonomous vehicle, environmentally friendly, using AI…

“They had criteria for investing and we matched almost everyone.

“We need similar criteria here. We need to be saying these are not only good projects, they are strategic projects for New Zealand,” Hikmet says.

“We need to do much more than treating strategic businesses as normal businesses.

“We are a small company. I’m talking the entire sector.”

Hikmet says Ohmio by itself, can not survive, instead it needs an ecosystem around it.

“For example, we use LIDR, which is light imaging and distance ranging, and it’s important for the vehicles to have such tech to move on.

“We need to see developers of LIDR here in NZ, along with developers of charging systems for the buses, and some companies related to the electric market controllers and how they can be done,” he says.

“These are all tech that can be done here with capabilities from universities and research centres. New Zealand could be a leader in this. This is what will keep us here and make a future for what we are doing. We cannot really act alone, we need to have the entire ecosystem around us to survive.

Legislation too, needs to change, he says.

Ironically, New Zealand is one of the very few countries that doesn’t require a driver in a vehicle in order for it to be on the road. It wasn’t by good design, more an over sight, but the fact still remains.

“It’s a big opportunity and we need to take it,” Hikmet says of the autonomous vehicle market.

“If we wait we will be too late. We need to put strategy and effort into ensuring NZ is a leader in the sector. We are small – both Ohmio and NZ – but this is something we can lead the world with.”