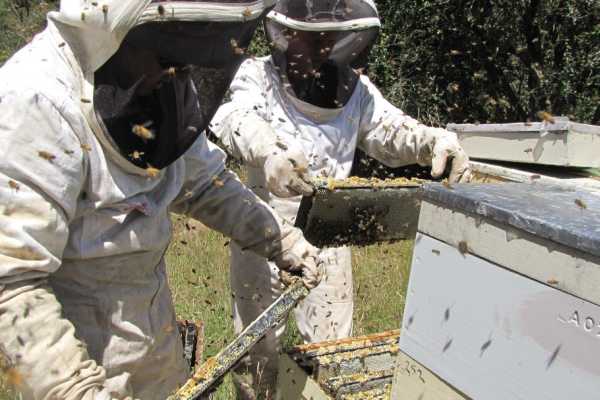 People have been keeping bees for something like seven thousand years, which means this is an industry steeped in tradition – and like many such pursuits, it means tradition can stand in the way of doing things better. But, while uneven, the march of technology enablement is also ubiquitous and better ways are emerging which can help beekeepers boost their efficiency, yields and performance.

Apiculture also provides a microcosm on how difficult it can be to effect change using technology innovations: just because it can be done, doesn’t always mean it happens.

One of the realities of writing about information technology is that it is easy to allow the focus to fall on the technology industry itself. More interesting by far are stories of how sometimes obscure industries can be improved with the application of that technology (even that tends to be vendor-driven, to an extent, as they cart-in-front-of-horse look for problems to solve with their solutions).

And yes, we just love to call that ‘digital disruption’ because it sounds trendy.

So it is then, that beekeeping comes under the magnifying glass. Seven thousand years means a high level of maturity – but with the 4th industrial revolution just recently underway, this industry is still unsophisticated at its rural end. Hives are established out there in the boonies, the bees do their thing, the honey is collected and processed in factories. It is only really at this point that more sophistication kicks in.

But at that rural end, plenty of opportunity exists for improvement particularly for the ‘monofloral honey’ for which the world is going crazy: manuka.

That’s according to Matt Lythe, head of location business intelligence at CoreLogic. He’s been hanging around at the 2017 Apiculture Conference which recently concluded in Rotorua. And yes, it was apparently a hive of activity, with over 1000 attendees, and potentially even more bad puns.

“This is an industry which, while increasing in sophistication, is still largely manually run. There’s ample opportunity for the introduction of technology from an operational point of view in terms of locating and managing hives, for monitoring production quality, and in dealing with scale as the growth in hives has been substantial in the past five years,” he told iStart.

From his perspective, Lythe explained that geospatial intelligence is valuable as it allows beekeepers to site hives in the right places to avoid allowing their bees to produce blended honey. That drives up the ‘Unique Manuka Factor’ which makes some New Zealand honey far more valuable than the regular stuff.

“That is where GIS comes into play; with it, beekeepers can better define where their hives are in relation to stands of manuka and kanuka plants. Compare that to how it is done now, where it is the individual’s choice where to put the hive, which can lead to contention as everyone wants their colony in the good spots and overloading.”

There’s a land care play, too, added Lythe, as the valuable native manuka and kanuka stands can be crowded out by exotic species like eucalypts – and so, Landcare Research is involved, flying drones with thermal imaging cameras which can detect various species based on the unique thermal signature produced by each plant.

“That means we have the data to plan the location of hives on these sites; we can track the pollination and prevent hive overloading. When you can do these things, the quality of the honey rises,” said Lythe.

IoT to control the lolly scramble
Manuka honey has been something of a gold rush, but like most lolly scrambles, it has come with a few black eyes. As the properties of manuka honey were made known to the world, demand spiked and the curious case of more honey reaching distant markets than left New Zealand’s shores became evident.

That raises yet another potential opportunity for technology to solve a real rather than perceived problem: traceability.

One of the current darlings of the industry, the internet of things, has obvious applicability for this purpose. Thinxtra business development manager Greg Howard said yes, there is plenty of interest in the honey industry for IoT solutions: “[There are] lots of trials and proofs of concept from 4 or 5 different companies [with solutions that range] from detecting weight change so they know when to collect honey, to asset tracking and perimeter security.”

Howard put iStart in touch with Julian McCurdy, CEO of Buzztech, a company which seeks to improve beekeeping through sensor and software technology. He confirmed inertia in the industry. “There is major potential to drive efficiency and performance, but the actual use is limited and where technology is used, it tends to be in isolated areas and not integrated into the business.”

McCurdy said that ‘probably 75 percent’ of the industry just isn’t interested in things like sensors, operations management software and data analysis. “These are non-tech folk and they are not looking to change at all. The old school methods are what they know and trust.”

The major opportunity he sees for change is in generational shifts; those born with iPhones in their hands are coming into the industry slowly but surely. “The kids are taking over and when that happens, the first thing they want to do is to improve and get things tidied up. Then we see demand for software and sensors to start monitoring.”

McCurdy said a modern beekeeping operation has software to run it, to keep track of all hives and to log all work done on them, with dashboarding on where things are and what needs to be done, as well as the usual systems needed to run any business.

The ‘bee specific’ software, said McCurdy, is being used by early adopters in that 25 percent.

As for sensors, which can even pick up audio from which hive health can be assessed and parasites identified, “They aren’t being implemented widely yet.”

Part of the reason for that is the difficulty of changing old ways of working. Another part is the high cost of the sensors, something the IoT promises to address as LPWAN is rolled out across the country and the effect of economies of scale kick in.

With proposals for traceability going through the Ministry of Primary Industries, added McCurdy, further impetus will be created for beekeepers to look to technology solutions. “And sensors alone won’t do it, so this may well help people to make the transition as they will see a very obvious purpose for getting software and sensors into their operations.”

Predictive insights
Poor adoption is a source of some frustration for McCurdy, because he recognises the potential for IoT-type sensors to fundamentally change how beekeeping is done and deliver improved results for the industry (hives are in sometimes properly inaccessible areas. Choppering in or even getting there in the 4×4 to collect honey before the optimal time is obviously inefficient. Arriving to find the colony dead, likewise, probably won’t improve production numbers).

“It is feasible that in the not too distant future, we will see bee stock monitored and we’ll be proactive around diseases, colony losses and so on. When you can monitor closely, you can fix issues before things break and you can build that into workflows to prioritise what gets done based on sensor data.”

In five to ten years, he said even more technology can be expected to drive apiculture performance. “It’s only going to get better. We’ll see augmented reality headsets in beekeeping headgear, spoken inspection reports automatically transcribed and logged. There are big opportunities to boost operations – but we [technology folk] need to show what can be done in a way that beekeepers can understand and believe. Collecting data and quantifying it is the challenge; it is a very new approach to beekeeping and that means it is a huge culture change to go towards software based systems.”

Lythe noted that with more sensing technology, more of the raw material for analysis will be made available, providing further capability for improving how honey is produced. “Right now though, the sector is like most and fairly simple [in its use of available technology] in most respects. But IoT sensors can be of great value and when you tie that sort of data in with GIS information, there’s potential for analysis tools to run scenarios to visualise, for example, virus propagation, and assess where hives need to be moved to maximise yields and drive performance. The industry is growing quickly and is getting more competitive, but right now, it is still at grassroots level.”