Feature Articles > Is a smart city really a thing?

Is a smart city really a thing? 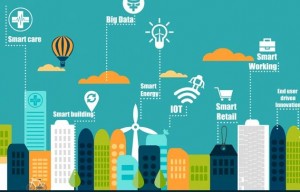 “There is a massive move from people towards cities; and cities will increasingly have to compete with each other for people, businesses and investments. There is no doubt that the truly smart cities will be the winners in this development.” That’s according to Paul Budde, writing recently for iStart on the value of smart cities – cities where the daily lives of residents, commuters and tourists are enhanced by clever technology that makes life easy, fun and more efficient.

Various Internet of Things (IoT) studies estimate billions and trillions worth of value from billions of sensors, but it is in smart city initiatives that those numbers start to become a reality, delivering value and sustainable outcomes to the populace.

The Australian Standing Committee on Infrastructure, Transport and Cities released a report in March which recognised the transformative potential of smart ICT in the design and planning of future infrastructure. “These technologies are transformational with the capacity to dramatically increase the productivity of the Australian economy,” said committee chair, John Alexander MP.

In the section called ‘visions of the future’ the report identified new technologies and processes like Building Information Modelling (BIM), the IoT, geospatial technology, machine learning and mobile laser scanning as instrumental to the success of our cities of the future (mobile laser scanning being those whizzy vans that not only photograph but micro-measure in 3D detail the cityscape as they drive around).

Dr Dean Economou, who was an acting business team director at NICTA at the time the report was produced, told the report’s authors that infrastructure needs in Australia’s cities will certainly grow: “By 2050, Sydney and Melbourne, and Perth too, are forecast to have double the population. However, roads and other kinds of infrastructure cannot possibly double. So we have to use smart ICT to inform where and how to increase the utilisation of our assets and also to inform new investment so we make the best possible use of scarce money.”

Dr Michael Dixon, of IBM, told the authors about his company’s Smarter Cities vision, saying: “In simple terms, Smarter Cities is about applying the currency of the 21st century data to all manner of challenges historically faced by cities in order to make traditionally dumb things smart and enable everything, from machine to machine communication through to the most sophisticated predictive modelling.”

NICTA was already using a wide range of data to produce more robust demographic modelling in areas such as predicting maintenance, crime and higher risks of road accidents, prior to its closure. Examples of technology being used to make cities smarter are emerging the world over. Barcelona has smart LED streetlights which only turn on when there are people present; Madrid has sensor-equipped rubbish bins which tell city contractors when rubbish needs to be picked up; San Francisco uses RFID chips and a mobile phone app to signal where there is an available parking space; Los Angeles is taking steps to change its understanding of where its energy is flowing; and Edmunton in Canada is using the power of the public to report and capture the state of playground equipment and picnic facilities in its parkland.

In many cases it is about how you capture the wisdom of the crowd, says Patrick McVeigh GM of business, innovation and skills at ATEED, Auckland Council in New Zealand. “What’s at the heart of a smart city is how you use technology to improve the experience of the city for residents, tourists and visitors.” He used the example of a recent collaboration with Spark and its business intelligence spin-off Qrious, where ATEED collected anonymised mobile phone data at a V8 motor racing event to better understand where people had travelled from how they interact with the event, what time they arrived and left, and something which they refer to as “dwell time”. This information will be used to improve planning and facilities at the next event.

Like Budde, McVeigh said that Auckland Council has to look at the subject of smart cities from a globally competitive angle. While there are lots of broad initiatives being taken thanks to the IoT, it’s a good idea to specialise in one sector and become a hot hub he said. In Auckland, that hub is focused on technology innovation – everything from ICT, to FinTech to AgriTech – based at the GridAKL innovation precinct in Wynyard Quarter. The innovation precinct itself is based on smart city principles and its building management systems are fitted with sensors that capture user behaviour and project them onto a data wall to allow better building monitoring and management and encourage more sustainable behaviour.

The number of sensors required for this type of monitoring is enormous. Analyst firm Gartner’s latest estimates suggest that there will be that 1.6 billion connected things used by smart cities in 2016, with 518 million of those being in smart commercial buildings. That’s up, they reckon, by 39 percent from 2015.

“Smart commercial buildings will be the highest user of Internet of Things (IoT) until 2017, after which smart homes will take the lead with just over 1 billion connected things in 2018,” said  Bettina Tratz-Ryan, research vice president at Gartner. A recent McKinsey Report sees things a little differently calculating that factories were likely to receive the greatest benefit from the IoT, with a potential financial impact of US$3.7 trillion per year to 2025, followed by cities, at US$1.7 trillion per year.

Indeed, the Strategic Forum for the Australasian Building and Construction Industry, a body that brings together key stakeholders in the Australasian building and construction industry, has stated that Australia and New Zealand, when taken together, “rank the third highest adopters of BIM in the world”, and that Australia and New Zealand both “demonstrate global leadership in the frequency with which they leverage BIM to visualise design intent”.

The Australian Standing Committee on Infrastructure, Transport and Cities has recommended that BIM be made mandatory for all projects exceeding A$50 million. It has also called for the formation of a Smart Infrastructure Task Force, based on the UK’s BIM Task Group which represents and co-ordinates government, academia and industry implementation of smart ICT in a city’s infrastructure.

The analyst predictions might be seen as pie in the sky, and the bureaucrats glacially slow to effect change, but it’s clear that clever innovations will get a willing ear, and budgets follow the excitement. The real competition, however, will be from the innovation ecosystem to build partnerships between application developers, industrial automation and sensor vendors so as to be able to access data, make sense of it and expose it to every day city-dwellers. And that will take foresight, and big budgets – budgets that will be helped by the our-city-is-smarter-than-yours competitive instinct.