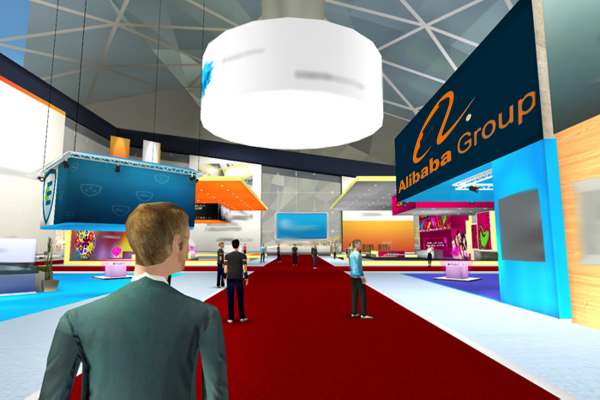 It’s boom times for the e-com leviathan, as it looks to bring B2B commerce into the digital age…

It’s been a good couple of weeks for tech giant Alibaba. As the coronavirus drives populations off the streets and online, the Chinese e-com/retail juggernaut has recently announced a whopping transaction growth of more than 85 percent in the last few months. That figure, impressive enough in its own right, has also helped the company pass its ambitious five year goal – US$1 trillion in gross merchandise volume, around one sixth of China’s total retail sales – bettering even its own forecasts.

So what’s behind the numbers?

“User growth: Annual active consumers in China reached 780 million including 726 million of China retail marketplaces,” Daniel Zhang, Alibaba Group’s CEO, said in a recent earnings call. “In other words one out of every two Chinese are buying [on] our platform”.

“Online sales is no longer an option, but a necessity.”

And all the arrows are pointing in the right direction, Zhang says, with plenty of more room for growth as the world adjusts to its post-Covid circumstances.

“On the retail side, online sales is no longer an option, but a necessity for the brick-and-mortar [stores],” he says. “We believe this is a new normal that will stay even after the pandemic is over.

“The world is moving toward digital-first and digital everything”.

Add to that the fact that the United States is Alibaba.com’s fastest-growing market for new buyers and sellers.

The company is now looking to build on that momentum as well as ostensibly support business during the the global Covid-19 pandemic, launching a series of 20 online trade shows, starting next month.

Modeled after last month’s successful ‘home and health’ trade show,  20 new shows are now planned, and, organised by product category, will roll out over the next 120 days, aiming to recreate the feel of a physical trade show in an online environment.

The company is working on improving its systems for both buyers and sellers. It recently announced a series of functionality upgrades to its platform, including new trade financing and freight features.

Of the new capabilities, Alibaba says that ‘qualified buyers’ will now be able to order goods through the platform with up to 60 days to pay after shipping. (The company is working with a B2B credit company to determine which buyers qualify).

As for the new freighting options, Alibaba has partnered with freight marketplace Freightos to provide merchants with the ability to compare, book and track both ocean and air freight via Alibaba.com Freight.

The tech giant is also in hiring mode, announcing last week that it intends to bring in 5,000 new employees for it’s Alibaba Cloud operation, one of the group’s fastest growing ventures, and currently around 10 percent of its revenue.

The company says that the new hires will consist of experts in networking, database management, servers, chips and AI.

“The digital transformation journey for businesses in China, which was previously expected to take three to five years, is now likely to be accelerated and completed within a year,” Jeff Zhang, president at Alibaba Cloud Intelligence, said in a statement.

“We are not only building trusted cloud technologies and services, but also investing in worldwide IT talent who are pioneering the development of cutting-edge cloud and data intelligence technologies.”

While worldwide, staff numbers are being cut back, spending curbed and new investments put on hold, Alibaba is nothing if not skilled at thriving under pandemic pressure. The company continued to thrive during the 2003 SARS outbreak – itself another novel coronavirus – even employing remote work options when it was forced to quarantine it’s entire workforce after an employee tested positive.

The company has said it plans to invest more than US$20 billion in its next-generation data centres, and they’re not the only one earmarking funds for the cloud: Microsoft has announced the creation of a US$1.5 billion data centre in Italy and plans for another billion dollar data centre in Poland. Amazon too is making similar investments, opening a new data center in Italy.

The first of Alibaba’s new live streamed trade shows – a US/invitation-only event for North American B2B sellers and buyers focused on nutrition and supplements category – gets underway in the second week of July.