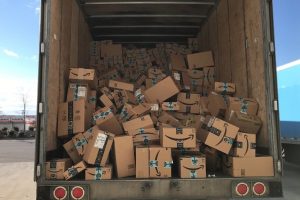 Everyone’s favourite e-commerce/cloud computing/streaming behemoth Amazon has had a bumper couple of months.

Though the e-commerce titan was coming off a weak third quarter, it came roaring back in the fourth, and last week announced final quarter 2019 profits of US$3.3 billion.

The analysts said they were expecting a cracker and that’s what they got. Pushed on by spendthrift Christmas online shoppers, and bolstered by its cloud services and streaming service arms, the company smashed profit expectations in the fourth quarter by a considerable margin.

Bezos got instantly richer to the tune of around US$13.2 billion.

Shoppers flocked to the online shipping platform these holidays with billions of items purchased through Amazon, including tens of millions of Amazon’s own devices. Best-selling of those were Echo Dot, Fire TV Stick 4K with Alexa Voice Remote, and Echo Show 5.

Amazon Prime, the paid subscription service that offers a combination of streaming music and video, plus free one day delivery (depending on where you live) has now topped more than 150 million paying customers worldwide, says Jeff Bezos, Amazon founder and CEO, and currently world’s most valuable person.

“Prime membership continues to get better for customers year after year and customers are responding – more people joined Prime this quarter than ever before, and we now have over 150 million paid Prime members around the world.”

That’s on the back of some serious investment from Amazon: The company says that it spent a staggering US$1.5 billion during the holiday period to support its one-day shipping rollout scheme (no, not for you, New Zealand).

It’s that gamble that’s paying off.

“The number of items delivered to US customers with Prime’s free one-day and same-day delivery more than quadrupled this quarter compared to last year,” says Bezos.

“Members now have free two-hour grocery delivery from Amazon Fresh and Whole Foods Market in more than 2,000 US cities and towns. Prime members watched double the hours of original movies and TV shows on Prime Video this quarter compared to last year, and Amazon Originals received a record 88 nominations and 26 wins at major awards shows.”

And if Bezos sounds pleased, he’s likely even more so now.

As shares spiked last Thursday in response to the announcement, Bezos got instantly richer to the tune of around US$13.2 billion, retaking his title as world richest human from Bill Gates.

Amazon Web Services, the company’s cloud computing arm, is proving to be highly proftbale. Business increased for the Amazon subsidiary by 34 percent to $US10 billion for the quarter, now accounting for more than 10 percent of the company’s total revenue.