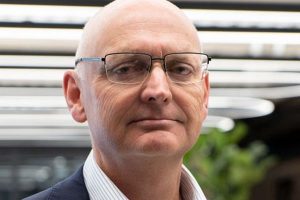 We are on the cusp between narrow artificial intelligence and broad AI – but companies are ‘absolutely on the money’ to be sceptical about ‘an incredibly intelligent system that is going to solve all your problems at the press of the button’.

So says IBM Australia and New Zealand director of artificial intelligence and data science Ross Farrelly (pictured). While he says companies are right to be sceptical about AI being some all-encompassing solution, Farrelly is adamant AI is already providing big benefits to companies in virtually every vertical.

IBM has long had a bet on AI. Its Watson technology was an early market leader and the company has continued to invest heavily in AI and cognitive computing. (Though some have suggested the appointment of Arvind Krishna – the company’s former head of cloud – to the CEO position earlier this year signals a further shift from cognitive computing to cloud computing for big blue.)

“We are not there in any way, shape or form at the moment.”

But even Farrelly admits that much vaunted scenario of AI capable of teaching itself to solve problems is very far in the future.

“We are not there in any way, shape or form at the moment,” Farrelly told iStart.

So where exactly are we on the AI journey currently?

Farrelly subscribes to the three escalating levels of AI model – narrow AI, broad AI and general AI – and it’s in that lowest bracket of narrow AI, where intelligent systems perform a single task extremely well, where we’re firmly sitting at the moment.

“It’s something IBM and the market in general is doing very well at the moment,” Farrelly says. Think virtual assistants answering questions on narrow fields such as credit cards or mortgages.

Simple, yes, but Farrelly says even those examples can have ‘extremely high business value’.

“We have multiple business customers around the world who are doing exactly that. They build a system and it can answer questions for a fraction of a cent as opposed to paying a human resource in a call centre to answer exactly the same question.”

That of course, depends on the level of sophistication and training, and Farrelly acknowledges that there are plenty examples of overly simple virtual assistants which can’t answer people’s questions or just direct them to a website.

“Over the last two years we’ve seen a lot of effort from established businesses with complex legacy back end to integrate intelligent systems into those. They are realising the business benefit of that and are investing more in order to make the assistants more intelligent.

“But we’re also seeing newer companies, startups and so on, who are building AI directly into their business model from the beginning.”

Case in point: A car insurance company which enables customers to take photos of their vehicle after an accident and upload it to the intelligent system which identifies the vehicle make and model, identifies which panels are damaged and provides an indicative quotation on the replacement cost.

Going broader
Narrow AI may be where we’re at currently, but Farrelly says the next iteration, broad AI, is rapidly coming down the tracks.

“This is where we are taking a much more complex, much more humanistic type of problem and attempting to solve it using AI.”

It’s something of a pet project for IBM. The company’s ‘innovation engine’ IBM Research’s Project Debater is one example of broad AI. It’s an intelligent system being trained to hold a live debate with one of the best debaters in the world. It’s a big challenge – the system has to understand what the topic is, search information and come up with facts and arguments to supports its side of the debate, listen to the oppositions arguments, translate those arguments from voice to text, analyse and identify any errors of fact and come up with counter arguments which need to be formulated into coherent sentences – preferably with some humour thrown in – and voice it back to the audience. (Late last year Project Debater spoke on both sides of a debate on the dangers of AI – narrowly convincing the audience that AI would do more good than harm.)

It is, Farrelly is at pains to point out, still very much in the R&D phase. But it holds potential for businesses, from the legal fraternity to companies wanting intelligent systems to assist in negotiations.

Farrelly says not only would such technology enable technicians to repair first time and not have to phone back to base, but it would reduce training requirements for the technicians.  He sees opportunities across many industries reliant on complex machinery, including aviation, mining and transport, to decrease the cost of maintenance and downtime and improve safety.

Peparing for the future
But if we are on the cusp of broad AI, there’s plenty of work to be done by companies in order to benefit from the technology.

“It’s important for strategists within organisations to be familiar with the trends and start thinking about how they are going to adapt their business models,” Farrelly says. “Companies that do adopt them are going to be more efficient, have a competitive advantage and companies who are lagging behind may find themselves in difficulty.”

He says trust between the end user and the system itself, will be a key factor.

“There are a number of facets to building trust. One is making your intelligent system  explainable, so you want to avoid building a black box where an algorithm just runs in the background, spits out an answer and there’s no context, no explanation, no transparency around how that has been developed.

Ensuring the intelligent system is aligned with corporate values – both legalistic and ethical – is also key. That includes ensuring responses are in keeping with your brand’s level of formality or friendliness, and the language of your brand is used.

Having a coherent well-planned strategy – and not engaging in what Farrelly calls random acts of digital, tops the list. It’s one of the big ‘errors’ Farrelly sees.

“Rather than having a planned strategy really identifying what decisions their business is built on and measuring the business value of those decisions and then prioritising those and attacking the really important ones in a logical and coherent way, they perhaps jump on the bandwagon and do them more in a random acts of digital approach and that generally is not productive.”

Then there’s the question of data: From data quality to ensuring the types of questions you want your data to answer informs the way you collect data.

“Often companies say ‘we’ve got this data, let’s go answer some questions’. A more productive way is to say ‘these are the questions we want answered, how do we need to collect the data in order that that data is capable of answering these questions’.”