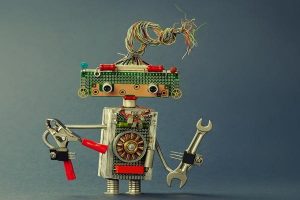 The roboadvisers are expanding, with revenues to reach US$25-billion in 4 years…

Heard of roboadvisers? Whether you have or haven’t, chances are that if not now, then at some time soon one will be used to look after your investments. Researcher Juniper reckons between now and 2022, revenues for roboadvisers is set to rise to US$25 billion; with current revenues at around US$1.7 billion, the growth of 70.3 percent per annum is pretty close to exponential.

Like many other professions, wealth managers look to computer programmes to help them be more efficient and (hopefully) make better investment decisions. Around the time of the global financial crisis, so-called ‘roboadvisers’ were born. As the name implies, these ‘advisers’ are automated, although generally supervised by a real person, and provide digital advice based on factors relating to the investment fed in on one side, such as age, risk profile and objectives, with algorithms going to work to deliver guidance on the other. The roboadvisers, also known as digital investment advisers, can as one might imagine, be offered online.

There are apparently around 100 roboadviser services available today, a number certain to increase given the ‘gold in them thar hills’. In a press release, Juniper Research said the rise in revenues is happening as ‘the automation of wealth management revolutionises the way individuals invest’.

In a statement, Juniper said its research, Fintech Futures: Market Disruption, Leading Innovators & Emerging Opportunities 2017-2022, found that roboadvisers will make investments more compelling to High Net Worth Individuals and lower income individuals, with average fees estimated as low as 0.6 percent of assets under management by 2022.

While the best-known and longest-operating roboadviser is Betterment, Juniper said disruption can be expected from new players such as Moneybox and Nutmeg.

Looking for a local commentator on roboadvisers brought us to Wellington software developer YouDo and business development manager Michael Daymond-King. He started off by confirming an old adage: just because you don’t know about X, it doesn’t mean X isn’t a thing.

“Roboadvisers are a big deal globally,” he confirmed. “But get your head around this, it is not AI or anything even close.” Algorithm? “Not even. Go to any insurance or wealth adviser and they will start by asking you ten questions. From that, they know who you are and what product they’re going to sell to you. We all think we are individuals, but it isn’t like that. You know the bell curve; at the end of the day, advisers in insurance, legal, wealth or whatever, are putting you into a pot with those first 10 questions.”

And that’s what, at the heart of it, a roboadvisor does, said Daymond-King. “A bit of software can do this far better. It doesn’t forget and can gauge nuance better in this sense.”

You don’t have to look far for confirmation of Daymond-King’s view; Investec, for example, provides just such a service on just such a basis, as reported in the Financial Times.

Be that as it may, Juniper found that roboadvisers are broadening the appeal of the wealth management market, with their delivery method via smartphone apps making the investment process more convenient. The researcher said this is ‘offering a compelling reason for millennials to invest’ and added that this will drive total assets under management by roboadvisers upwards twelvefold, to US$4.1 trillion in 2022, from an estimated US$330 billion in 2017. And you thought millennials were broke.

The situation down under
But you won’t find roboadvice in New Zealand, added Daymond-King, and said that’s apparent when signing up for an online service locally. “Go sign up at Craig’s Investment Partners and you’ll get a 14 page printed colour document which needs a wet signature, which hasn’t really been a thing in New Zealand since 2001. Contrast that with what you get signing up for an online ETF [exchange traded fund] overseas – it’s an intuitive and easy process. That tells you interesting things about why we haven’t got roboadvice in New Zealand…”

The situation is a little different across the pond, said Daymond-King, and said the model followed by the likes of ‘online investment adviser’ StockSpot (which is another name for roboadvisers) is ‘probably what will happen in New Zealand’. That model is to use established wealth managers as a distribution channel to market. “Over there, all the banks are having a pop at it, but they aren’t calling it roboadvice. Here, if you Google roboadviser, you’ll probably come up only with our company name.” Which is precisely what happened.

The problem locally, said Daymond-King, is that a license is required to provide financial advice; this, he added, gave rise to a ‘weird situation’ where mom-and-pop investors are able to buy into things they know nothing about (through platforms like Sharesies, for example), but the providers of those platforms are legislatively precluded from providing the advice these uninformed investors might so desperately need. “But it is a short hop from providing the investment platform to providing the roboadvice,” he added.

While Daymond-King is dismissive of the notion of any sort of AI (which is in any event arguably just a vague term for ‘computer programme’) in roboadvisors, Juniper said it expects the software to become increasingly automated over time as AI and machine learning based approaches mature. Research author Nick Maynard, in the researcher’s statement, said: “The technologies powering roboadvisors will mature to such an extent that they move from their current human supervised role to being utilised in a fully automated way. This will be aided by track records of performance automated roboadvisor systems are establishing.”

That said, and given that in Australia and globally roboadvice is already a big deal, is this an industry which will mature in New Zealand? Daymond-King responded equivocally. “Unlikely. But then, peer-to-peer lending took a long time to get here, then took off like a wild thing. Harmoney, with which we helped, was probably six or seven years late, but in three months they ended up lending more than all of Australia’s P2P industry, which had maybe a four year head start. But that’s because Harmoney was set up by people who understand retail finance well, versus Australia, which was set up by people who understood technology well.”

In a follow-up email, Daymond-King added:  “Sharesies and similar platforms as mentioned on the phone are the toe in the door to robo platforms until someone is granted the exemption by the FMA which will cover roboadvice in any meaningful way until the legislation covering this business opportunity changes. Without doubt, at least one if not three or four of the advisors/wealth managers/banks will bring out some form of robo platform this year. The only thing holding back the big guys will be their own internal IT and innovation capacity.

“The trick will be who white labels something from offshore, or who decides to own the space (like Harmoney/Trademe) and build something very specific for this market.”

For those keen to learn more, ETF Watch has a useful explanation and roundup of the top Australian roboadvisers.

Juniper offers a complimentary whitepaper: The Future of Fintech – Disrupt, Collaborate or Die.