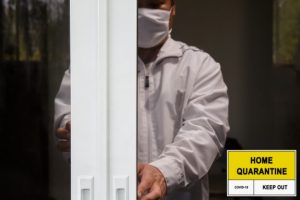 Does tech have a role in managing isolation?…

A new report in The Lancet suggests countries which have quickly deployed digital technologies – including for contact tracing and quarantine – could be the long-term winners in the battle against Covid.

The report, published yesterday, comes as New Zealand grapples with regular breakouts from local border isolation facilities, and escalating costs of the facilities. Meanwhile in Australia, where some states are now charging for quarantine, a judicial inquiry is looking into the ‘bungled quarantine program’ after reports security guards in Melbourne spread the virus after having ‘a good time’ and in doing so helped spread the virus, resulting in a second lockdown for Victoria.

Recent escapes from facilities in New Zealand – the latest saw five abscond from a Hamilton self-isolation facility have prompted calls for tracking bracelets, similar to those used in Hong Kong, to be implemented in New Zealand.

“In the race to contain the spread, countries that have quickly deployed digital technologies have remained front-runners.”

Nick Wilson, University of Otago professor of public health, told Newshub earlier this month the use of electronic bracelets should be explored by the New Zealand government as an extra form of security.

Hong Kong’s Stay Home Safe monitoring system, which tracks people entering the territory and returnees, is an electronic wristband, with a QR code. The wristband synchronises with a mobile app people are required to download at the border, alerting if anyone moves outside the quarantine area.

In Taiwan, home quarantined people are monitored electronically via government-issued mobile phones tracked by GPS, with digital fences to trigger warnings – and levy fines. (And it should be noted both the Hong Kong and Taiwan offering are for use with those self-isolating outside government controlled facilities.)

Western Australia’s Covid-19 Response Act gives police expanded powers, including the use of ankle bracelets for anyone failing to comply with quarantine orders. WA Police were provided with 200 of the GPS tracking bracelets.

New Zealand’s government, however, appears to have consigned the use of electronic bracelets to the ‘too hard’ basket with Minister Megan Woods saying issues around ankle bracelets for those in isolation were ‘complex’ with legal factors to consider.

The Lancet Viewpoint, notes that mobile phone solutions for quarantine enforcement can be bypassed by leaving a quarantine location without their devices, however, it says used in combination with other strategies, it could provide benefits. (And they’re not without issues, either. Last week, major security flaws were found in South Korea’s mobile app, used to enforce quarantines. The now fixed flaws meant hackers could have retrieved the names, locations and other details of those in quarantine, or tampered with the data, potentially making it appear a person had breached their order or were still in quarantine when really they were somewhere else.)

The peer-reviewed medical journal notes the use of artificial intelligence, cameras and digital recorders, GPS, mobile phone applications and QR codes among the many technologies being deployed as countries grapple with the need for effective quarantining, without closing down entire countries, but also notes issues around civil liberties.

It’s just one area where technologies are being deployed, with The Lancet highlighting ways in which successful countries have adopted a range of technologies for pandemic planning, surveillance, testing, contact tracing, quarantine and healthcare.

“The integration of digital technology into pandemic policy and response could be one of several characteristic features of countries that have flattened their Covid-19 incidence curves and maintained low mortality rates.

“In the race to contain the spread of a highly transmissible virus, countries that have quickly deployed digital technologies to facilitate planning, surveillance, testing, contact tracing, quarantine and clinical management have remained front-runners in managing disease burden.”