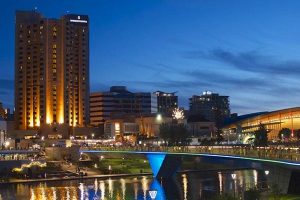 Adelaide is pitching to be Australia’s fastest metropolis…

Just a few days after the entire State was blacked out following a massive storm, South Australian capital Adelaide has signalled that it still wants to be the fastest city in Australia. Once a manufacturing power house, South Australia has lost much of its prowess, and is now seeking to reinvent itself.

It is already committed to becoming a Smart City and has conducted a series of autonomous vehicle trials.

Now Adelaide City Council has given ‘in principle’ agreement for a 10 gigabit per second optical fibre network to be constructed that will connect local businesses, government and researchers to the cloud and one another.

The City Council’s associate director information management, Peter Auhl, said that a business case would now be crafted that was intended to deliver “infrastructure for the future.” He was not able to give an indication of when the network might be installed – other than it “would not be an elongated process” – or how much it would cost, but noted that a series of options would be canvassed including a public-private-partnership arrangement so that South Australian residents aren’t left to foot the bill for the future.

The 10 Gbps speed was selected as it offered a “financial sweet spot” for businesses to connect to optical fibre networks, though Auhl told iStart that in five years much faster connections of up to 100 Gbps might be possible.

Auhl said that at presen,t there were some organisations in Adelaide which were struggling with business to business communications over the internet. “Internet connectivity is not what it should be,”; and he said the contention for bandwidth with online entertainment services such as Netflix and Stan compounded the problem.

Adelaide’s 10 Gbps network would be “complementary” to the NBN, according to Auhl, and dedicated to business rather than consumer use.

“This is really how to accelerate the infrastructure and help Adelaide through its economic transition,” said Auhl. The City is also hoping to attract more entrepreneurs and startups.

Adelaide Lord Mayor Martin Haese said that he was confident the network would attract new business and entrepreneurs to the City, particularly “large, digital-reliant businesses such as those within the health, creative, finance and defence sectors.

Those businesses need power as well as communications links and last week’s State wide power outage has dented South Australia’s reputation. A fast network is fine – but not if you can’t plug in your connecting computer. Auhl acknowledged that the blackout had been a problem but said that the power outage was an unprecedented event. “We are unlikely to see those events regularly in the CBD,” he said.