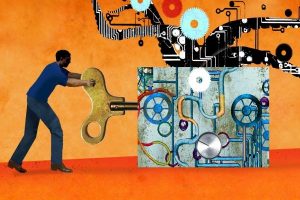 Digital transformation continues to fuel demand for cloud services, according to Dr. Werner Vogels, CTO and VP of Amazon Web Services who was in Sydney last week. He said AWS believed the massive acceleration of demand is prompted by the number of large companies now publicly pushing workloads into the cloud.

He said that, as a result, smaller organisations recognised the larger companies would have likely performed due diligence on the service providers, and hence the cloud is seen as an increasingly safe bet.

Certainly in Australia and New Zealand, AWS has won a slew of corporate clients including the Australian Stock Exchange, Technology One, AMP, Xero and Domain, all of which run systems in the cloud. AMP, for example, now has 400 separate workloads running in AWS, according to CIO Craig Ryman.

“This is not just a cost play – but access to speed and capabilities. It’s moved to an innovation platform for us. The cloud has been the fuel for digital disruption,” Ryman said at a media event in Sydney.

Katherine Squire, GM application development and DevOps at the ASX, noted, however, that there is still some cloud caution, and that the ASX’s first cloud venture involved a small app because “We can’t mess it up the first time.” There was no mess-up, however, and she described a burgeoning innovation culture developing at the exchange, which will be holding its first hackathon next month with funds put aside for cloud time to support experimentation.

Mark Cohen, CTO at Domain, explained that one of the major benefits of cloud computing is that it lowers the cost of failure, to the extent that small trials which don’t work are instead characterised as experiments. This, in turn, fuels innovation efforts. He said Domain has moved from one release every three weeks, to an average release-to-production of 60 software updates per week. While these, he acknowledged, were “very small incremental pieces” it did point to a more innovative culture.

Xero’s Australian MD Trent Innes, meanwhile, said that last year it released 1,400 updates and expected that pace to increase. The company is midway through a migration to AWS and has so far transitioned more than 500,000 users from Rackspace to the Amazon cloud.

Asked about competition in the sector (AWS leads the way with Microsoft Azure chasing hard), Vogels said there was still plenty of headroom for growth and that it would not be a “winner takes all market” but there would likely be a handful of global players because of the substantial capital investment required. As to the potential emergence of new disruptors he noted; “There is no compression algorithm for experience.”