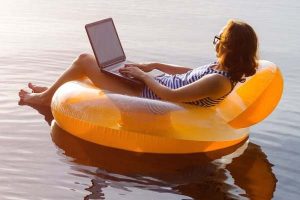 2020 may be the year the workforce came untethered, but is it all too good to be true?…

If you believe the remote-work enthusiasts, it’s a bold new decade of business, spurred on by the Covid-19 pandemic and the countless employees around the globe it has forced home.

That’s not a wholly bad thing of course. Workers have long insisted that productivity goes up and stress goes down when flexible working arrangements are offered by employers. Some even say there’s a financial advantage: According to one recent survey of US-based telecommuters, the average annual income for remote workers comes in around US$4,000 higher than that of non-telecommuters.

And with the potential for reduced overheads, the bean counters at head office are interested too. According to one statistic, more than four-fifths of businesses that facilitate remote work report increased productivity, with another 77 percent saying that allowing employees to work remotely ‘may lead to lower operating costs’.

“The pain points of remote work are multi-faceted.”

With the Covid-19 disaster affecting everything, everywhere, major organisations are beginning to dip a toe – and in some cases a leg – into remote work initiatives.

Kiwi telcos 2degrees and Vodafone and Australia’s Optus are all cutting back in-office hours for workers – with 2degrees only having staff in the office on Tuesdays and Thursdays and more than half of Vodafone’s staff now working from home.

AMP is going even further. AMP Wealth Management, the KiwiSaver arm of the financial services company has announced that staff will leave its Auckland and Wellington office floors entirely, due to both popular demand from workers and following a successful work-from-home trial-by-fire during lockdown.

During the lockdown no decline in productivity was observed says the company, and employees were enthusiastic too. More than 90 percent of the company’s 350 staff said they would prefer either working from home exclusively or as part of home/office mix – as opposed to working from the office full time. Smaller premises are likely to be set up outside of the central city to accommodate workers unable to work from home and facilitate face to-face meetings.

It all makes a lot of sense on paper, but all may not be well on the work-from-home front. Though investment in all the right places is increasing, the unique pain points of remote workers are beginning to emerge, from shoddy knowledge-sharing practices to missing memos, to the rampant use of unapproved apps.

“Remote work has always brought its fair share of problems, and new ones continue to emerge,” says the 2020 State of the Digital Workplace, a new report into remote working produced by SaaS company Igloo.

First up, unreliable tech, says the report. According to the study, 85 percent of remote workers say they have had at least one meeting interrupted due to technology issues such as lost connections, Wi-Fi problems and incorrect dial-in information.

“The pain points of remote work are multi-faceted,” says the report. “Some stem from feelings of exclusion from company culture, and others are the product of unreliable, outdated collaboration technologies.”

According to the report, more than a third of remote workers have found themselves unable to access important documents or information, with a similar number reporting that they have been unable to access people or groups due to technical issues.

So what’s the solution? A shiny new employee comms tool? Not so fast says the report.

“Teams lose focus when there are too many channels of communication, and rapidly switching between platforms can waste more time than the platforms are designed to save,” says the survey.

“Nearly half (51 percent) of respondents say they are overwhelmed by the amount of non-work related messages sent via apps like Slack and Teams… 64 percent have sent chats to a coworker sitting right next to them – employees might be more connected, but some are now talking less.”

Alarmingly, more than a third of respondents say they have sent a message to a coworker that they wish they did not, including sensitive company information shared with the wrong people.

For IT departments, running a tight ship across a remote workforce brings new complexity to the security challenge.

Knowledge-sharing is also threatened by this collaboration tool fatigue, with the percentage of employees who ‘avoid sharing documents because they either can’t find them or it would take too long to do so’ now accounting for more than half of workers.

So while the benefits are clear and many – including happier staff and better public health – it’s early days yet. Communication issues are just one challenges to be met, as is worker isolation, maintaining team engagement and a host of others.

2020 may be the moment the workforce went home, but we’re still just beginning to understand what the true cost of a truly remote workforce is likely to be.