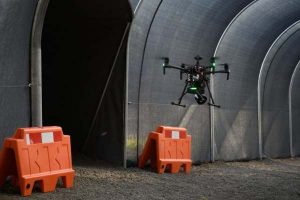 Calling it ‘a major breakthrough in the journey to fully autonomous flight systems’, Emesent has announced the release of its Autonomy Level 2 (AL2) technology.

Based on its Hovermap technology, the Brisbane-based company says the launch will enable drones to fly outside of communications range and beyond line of sight and into unmapped areas, the first plug-and-play payload for industrial drones in the world that can do so.

With AL2, drones can self-navigate, avoiding obstacles beyond line of sight, while being operated from take-off to landing from a safe distance, says the company.

“With the intelligence to navigate environments without a prior map, customers can use the system to carry out complex missions.”

“The system processes data on-board in real-time to stream a 3D map of the environment back to the operator’s tablet, providing instant and detailed insights into the surrounding area, as well as any potential hazards,” says the company.

“The entire mission from take-off to landing is conducted by interacting with the live view 3D map, allowing stopes to be mapped with just a few taps.”

Emesent’s launch builds on a decade of research by CSIRO’s Robotics and Autonomous Systems group into drone autonomy. Customers in mining, infrastructure and heavy industry sectors have been using Hovermap’s Level 1 capabilities for just under two years, to map GPS-denied areas within line of sight.

Use cases for autonomous drone tech are of course plentiful. In addition to mining, the insurance industry, oil and gas, construction, energy and agriculture have all started using UAVs, as has the military. The global UAV market size is projected to reach US$133 billion by 2026 (from US$25.9b in 2019), with military applications one of the most significant factors driving growth.

The Australian Air Force, in partnership with Boeing, recently revealed its new combat drone. Part of the AU$40m ‘Loyal Wingman’ project, the drone has a range of 3,700 kilometers. Despite its large payload bay, the drone primarily designed for electronic warfare and reconnaissance missions. Ultimately the RAAF plans to buy three drones as part of the project.

“In 2019, the defense and security division contributed the highest revenue to the drone analytics market, due to the high military spending for procuring solutions that aid in assessing the vulnerable areas that are susceptible to attacks, identifying terrorism-related activities near the border, enhancing the monitoring capabilities of the armed forces and improving the communication among personnel in remote areas,” says the latest Drone Analytics Market Research Report from Research and Markets.

“This is a huge step forward for drone autonomy and a massive benefit to industries like mining, civil construction, and emergency response,” says CEO and co-founder of Emesent, Stefan Hrabar of the AL2 technology.

“With the intelligence to navigate environments without a prior map, customers can use the system to carry out complex missions, secure the safety of personnel, and drive greater efficiency in their operations.”