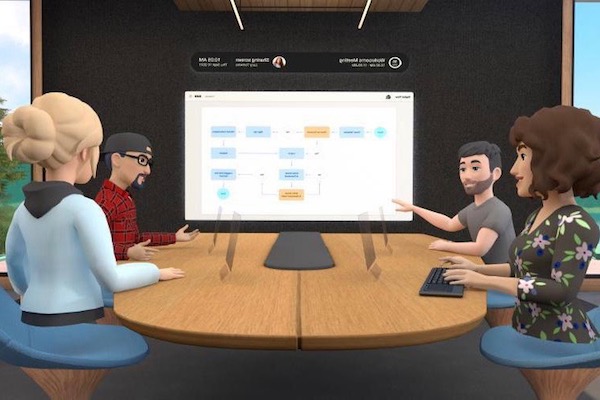 Is the metaverse the solution to employee hybrid work woes?

Fifty percent of Kiwis and Australian’s are ready to embrace the metaverse for meetings or team gatherings in the next year.

At least that’s according to Microsoft’s second annual Work Trend Index, which also highlights the apparent growing disconnect between employee and employer attitudes to hybrid work.

The report, which draws on data from more than 30,000 workers in 31 countries and trillions of anonymised data points from Microsoft 365 and labour trends on LinkedIn, shows 50 percent of Australian and New Zealand employees are open to using digital immersive spaces in the metaverse for meetings or team gatherings in the next year, just marginally short of the global average of 52 percent. (Interestingly, Latin America is most receptive, at 63 percent, followed by Asia Pacific at 56 percent. Europe is least receptive at 45 percent.)

“The people you are speaking with are better able to see your body language, and back-and-forth conversations feel more natural”

And we’re apparently happy to sub in an avatar too, with 44 percent of Australian and New Zealand employees open to representing themselves as an avatar in meetings in the next year.

Of course, there is the question of whether anyone really knows what the metaverse – in all its vague glory – actually is. Just 13 percent of employees globally said they didn’t know what the term ‘metaverse’ means, but given its newness, and its vagueness, knowing what it actually is is a whole different question.

That’s not stopped Microsoft from declaring ‘the metaverse is coming to work’.

Mar Gonzalez Franco, Microsoft Research principal researcher, says avatars and the metaverse ‘bring us one step closer to making people feel like they’re together even when they are physically apart’.

“Our early research shows that when compared to an audio-only call, people feel more engaged, more present and even more comfortable when using an avatar in a meeting,” Gonzalez Franco says.

“The people you are speaking with are better able to see your body language, and back-and-forth conversations feel more natural,” she adds.

Companies wanting to know exactly what their staff want in terms of this metaverse future, however, won’t find much on technology specifics to guide them in Great Expectations: Making Hybrid Work Work.

Instead, the report notes simply that ‘leaders need to consider how emerging technologies like the metaverse and AI can augment collaboration and facilitate co-creation and creativity in a distributed work world,” it says.

“Networking will look quite different in this new era, with employees increasingly choosing to work from home. Leaders will need to think bigger when it comes to organising events that facilitate connection, regardless of physical location. The Work Trend Index report identifies the metaverse as a potential avenue for this, whether it be meetings with avatars that are able to show body language better than standard audio calls, or sessions in immersive virtual spaces.”

The report also highlights that employees have a new ‘worth it’ equation, with 48 percent of A/NZ workers more likely to prioritise their health and wellbeing over work than they were before the pandemic. Meanwhile, 20 percent of A/NZ workers actually left their job in the past year – ahead of the 18 percent global average – with 48 percent saying they’re ‘somewhat’ or ‘extremely likely’ to consider changing employers this year. That figure jumps to 56 percent for Gen Z and Millennials.

Managers, meanwhile are struggling to to meet the new expectations, with 61 percent of A/NZ people managers saying leadership at their company is out of touch with employees – well ahead of the global average of 54 percent. And despite the initial ‘remote work is good for productivity’ push, 59 percent of A/NZ business leaders now fear productivity has been negatively impacted since the shift to remote or hybrid work. (On the flip side, 80 percent of A/NZ workers say they are as productive or even more productive compared to a year ago.)

Metaverse or not, the report shows business is at an inflection point, with the last two years having left a lasting imprint on how we work – and how we define the role of work in our lives. For businesses, it’s great new expectations indeed.