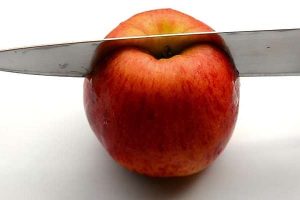 Chaos reigns in the smartphone market with Huawei up, Apple down and Samsung fighting to hold onto its market lead…

From the surface it looks like a market in decline: According to IDC, smartphone shipment volumes are down again this quarter – a 6.6 percent overall drop year over year – bringing to a conclusion a sixth consecutive quarter of decline for the smartphone market.

The first quarter of 2019 saw just 310.8 million units shipped worldwide, with every indication that 2019 will represent another year for declining fortunes for the market as a whole.

“This new ranking of Samsung, Huawei, and Apple is very likely what we’ll see when 2019 is all said and done.”

Even more dramatic however is the stalling of Apple. While still the only smartphone game in town for many tech enthusiasts, Cook and company have suffered through an exceptionally poor quarter, sustaining an eye watering drop in shipments of more than 30 percent. (Note: Another report, from Canalys finds Apple’s performance slightly better, but not by much). 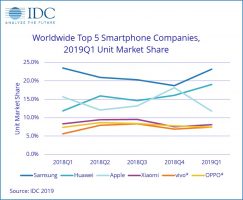 So what’s behind the slowdown? It’s the high end of the market suffering worst says IDC, with users seemingly hesitating longer in upgrading their best-in-show devices.

“Consumers continue to hold on to their phones longer than before as newer higher priced models offer little incentive to shell out top dollar to upgrade,” says Anthony Scarsella, research manager with IDC.

“Moreover, the pending arrival of 5G handsets could have consumers waiting until both the networks and devices are ready for prime time in 2020.”

Add to that the forthcoming wave of new foldable devices, and users have good reason to hold onto their cash for now.

But it’s also clear that Huawei has emerged as a legitimate threat to market leader Samsung – and may just have a shot at tempting Apple snobs away from their legacy favourite. While shipments plunged for both Apple and Samsung, Huawei managed to grow its turnover by 50 percent, narrowing Samsung’s lead and establishing the Chinese tech manufacturer firmly as the world’s number two smartphone manufacturer (despite growing security concerns over its 5G technology and potential state influence from China).

“In China, Huawei continued its positive momentum with a well-rounded portfolio targeting all segments from low to high,” says IDC. “Huawei’s high-end models continued to create a strong affiliation for the mid to low-end models, which are supporting the company’s overall shipment performance.

“Huawei is now within striking distance of Samsung at the top of the global market.

“This new ranking of Samsung, Huawei, and Apple is very likely what we’ll see when 2019 is all said and done,” says IDC.

So if Huawei can shrug off espionage accusations to achieve outstanding marketplace gains, just what could Apple’s problem be?

“Despite the iPhone’s installed base in China being well over 300 million, it is vital that Apple prevents users deserting it for Android vendors. Apple faces a challenge in China to localise its software and services offerings as quickly as in Western markets.

“Its hardware is therefore more exposed to competition in China than elsewhere. Bringing up-to-date features, such as 5G, next year, as well as localised software is vital to prevent demand shrinking further.”

Thinking about bucking the trend and upgrading now? If you’re looking for the latest and greatest, here’s what you’re likely to spend picking up one of the big three’s best in shows: