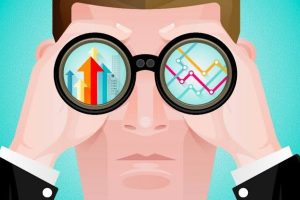 Conclusion: All jobs will change…

Predictions around how AI is going to affect the workforce tend fall into one of two categories: Happy-worker utopian fantasies and dystopic, you-can’t-beat-the-man nightmares.

What both those lines of thinking often lack however, is hard data and in that, new research about the future of work is offering something reasonably unique.

The research, The Future of Work: How New Technologies Are Transforming Tasks, was carried out by the MIT-IBM Watson AI Lab, IBM’s collaborative industrial-academic laboratory focused on AI research.

There’s no substitute for common sense.

So what are the key takeaways?

Tasks are indeed shifting from humans to robots, but slowly
Tasks that are more likely to be done by AI or machine learning are disappearing from employers’ job requirements. On average, workers were asked to perform 3.7 fewer tasks in 2017 than seven years earlier.

“The decreased task requirements are likely due to employers’ seeking greater focus from workers and the early adoption of AI and machine learning, indicating a fundamental shift in the way work gets done,” says the report. “But the shift has been small, allowing time for workers and employers to adapt.” 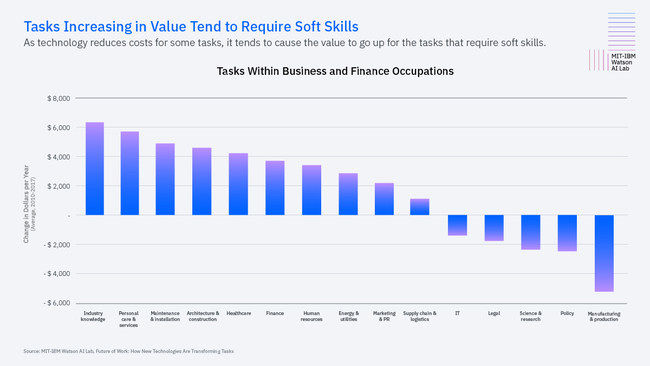 There’s no substitute for common sense
According to the report, industry knowledge – already a valuable commodity – is gaining in value.

“As technology reduces the cost of some tasks, the value of the remaining tasks increases,” reasons the report. “Tasks that require grounding in intellectual skill and insight as well as to some degree, physical flexibility, common sense, judgment, intuition, creativity and spoken language have tended to increase in value.”

Interestingly, this can be seen across both highly and lowly paid positions.

“In low-wage personal care and services occupations (hairstylists, recreational workers, fitness trainers, etc), annual wages for design tasks – like presentation design or digital design – have increased between 2010-2017 by US$12,000, on average among these workers.”

Middle-tier workers are feeling the squeeze
Tasks have shifted out of mid-wage jobs into lower and higher categories says the report, and with those shifting roles, the money is moving too.

“For every five tasks shifted out of mid-wage jobs, four tasks move to low-wage jobs and one moved to a high- wage job.

And while the pace of change is slow now, expect it to accelerate soon, as AI is increasingly adopted throughout the economy.

“Workers have time to adapt by learning or honing skills that require innovation, creative thinking or deep insight and experience,” IBM assures workers.

“Meanwhile, employers across all industries should begin to focus on reskilling their workforces, redesigning job roles and supporting career advancement.”