News > Just how much did Covid accelerate digitisation?

Just how much did Covid accelerate digitisation? 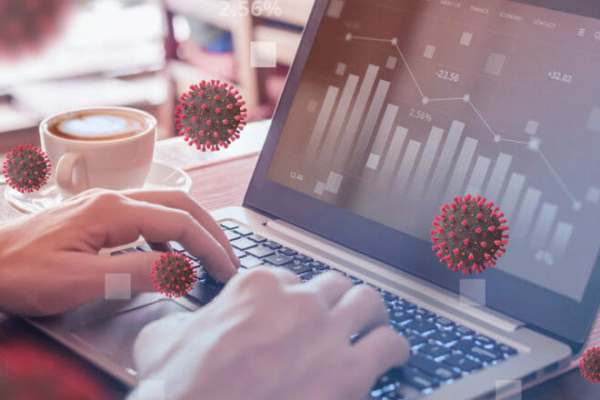 McKinsey and PwC surveys offer up some tangible figures…

Covid has been the burning platform, making BAU an impossibility and accelerating companies’ digitisation by around 10 years and pushing them over the technology tipping point.

That’s the verdict from a McKinsey and Company C-suite survey, at least. The management consulting company says in just a few months, the Covid-19 pandemic has brought about years of change, accelerating digitisation of customer and supply chain interactions and internal operations.

“The results suggest that companies are making these crisis-related changes with the long term in mind.”

Globally digitisation of products and services within a company has accelerated a ‘shocking’ seven years, McKinsey says. In Asia Pacific the acceleration has been even greater, with local companies recording a 10-plus years increase in the share of offerings that are now partially or fully digitised.

The mix of types of digital products in companies’ portfolios haven’t changed dramatically, suggesting that companies have refocused offerings, rather than making any huge leaps in product development – unsurprising given the short time frame.

The rate of acceleration in developing digital products also varies based on industry: Consumer packaged goods and automotive and assembly have seen low levels of change in their digital product portfolios. Healthcare, financial services and professional services on the other hand are reporting greater levels of digitisation.

The report also shows that interactions with customers are now largely digital, at 53 percent in Asia Pacific – up from 32 percent in December 2019. McKinsey says that jump is an acceleration of four years on the average rate of adoption from 2017 to 2019.

Similar accelerations of digitisation are also being seen across internal operations such as back office, production and R&D processes and interactions in supply chains.

The rate of change has caught many by surprise. Survey respondents say their companies acted 20 to 25 times faster than expected in responding to Covid-19 related changes. And when it comes to enforced work from home that figure soars to 40 times faster than respondents thought possible. In fact, before the pandemic, respondents believed it would have taken more than a year to implement the level of remote working that took place during the pandemic. With Covid-19 as the driver, it took just 11 days on average. 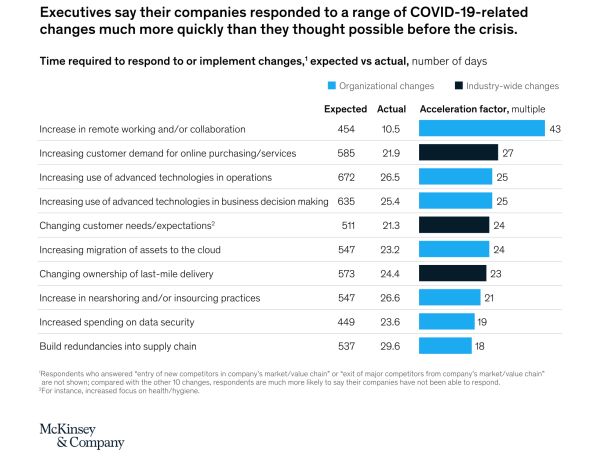 Responding to increasing customer demand for online purchasing and services was slashed from the expected 585 days – or 19 months – to just 22 days, while the increased use of advanced technologies in operations, expected to have taken more than 22 months, came in at around 27 days in actuality.

As to why companies didn’t implement the changes before Covid hit, just over half of respondents said they simply weren’t a top business priority.

So are the changes going to stick long term? According McKinsey, the answer is yes, especially when it comes to changing customer needs or expectations and the increase in remote working and collaboration, where 62 percent and 54 percent respectively expect the changes to stick. The increasing migration of assets to the cloud was also deemed a shift likely to stick by 54 percent.

At the other end of the spectrum, just 35 percent expect nearshoring and/or insourcing practices to fall by the wayside. Interestingly, 35 percent believe their increased use of advanced technologies in business decision making will also not stick – though 49 percent say it will. 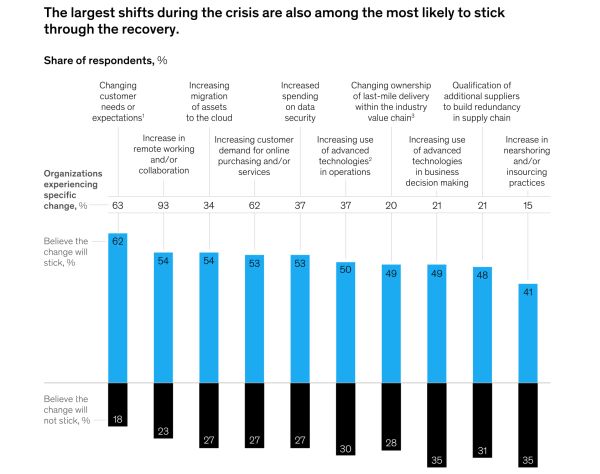 “The results suggest that companies are making these crisis-related changes with the long term in mind,” McKinsey says.

“For most the need to work and interact with customers remotely required investments in data security and an accelerated migration to the cloud. Now that the investments have been made, these companies have permanently removed some of the pre-crisis bottlenecks to virtual interactions.”

Which brings us somewhat neatly to the issue of security. While McKinsey doesn’t deep dive into the issue (though it does not that 53 percent expect their increased spending on data security to stick), PwC’s Global Digital Trust Insights 2021 report paints a picture of the cybersecurity profession finally coming into its own on the back of the rapid digitisation.

The report, which draws on a survey of more than 3,000 business and tech executives globally, says in the pandemic’s first three months, CEOs reported their organisations were accelerating digitisation at a ‘surprising’ speed, advancing to year two or three of their five-year plans.

The pandemic itself and the economic fallout are driving further change, with 40 percent of executives saying they’re accelerating digitisation – and with skyrocketing digital ambitions. Twenty-one percent report they’re changing their core business model and redefining their organisations, while 18 percent say they’re breaking into new markets or industries. Both categories are double last year’s survey.

Doing things faster and more efficiently is the top digital ambition for 29 percent of executives, while 31 percent are modernising with new capabilities. More than one-third – 35 percent – say they’re speeding up automation to cut costs.

All that change is translating to a rethinking and reframing of cybersecurity strategies, Sean Joyce, PwC global cybersecurity, privacy and forensics leader, says.

An overwhelming 96 percent are adjusting their cybersecurity strategy. Half say they’re now more likely to consider cybersecurity in every business decision, up from 25 percent last year.

“The evolving role of a CISO and their importance to the organisation has never been more critical to both its survival and growth,” Joyce says.