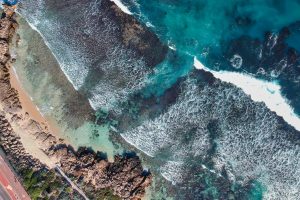 Using satellites, crowdsourced drone imagery and the blockchain, a new startup is looking to offer a high-res Google Earth alternative…

From measuring the effects of a natural disaster to local townsite planning and infrastructure – not to mention security and defense, mining and the media – real-time imaging is the Holy Grail of digital map making.

With the launch of geospatial mapping and imagery startup Soar, it might now be closer than it’s ever been.

The company has set about creating what it calls the world’s first ‘super-map’, a platform capable of combining spatially tagged imagery from drone operators, aerial surveyors and satellite image providers alike, into a high-res, constantly updated, ‘living’ map of the world.

“The problem Soar is solving is that almost 80 percent of all mapping imagery is currently accessed through just one channel, which is, for the most part, reserved mostly for niche commercial use,” says Soar founder and CEO Amir Farhand.

“In many cases, the general public only has access to resources which are not updated as frequently. Soar addresses these limitations by generating dynamic, ever-changing data on our platform.”

To create such a ‘super-map’, the company is crowd-sourcing imagery from drone owners around the world, which the drone operator can then monetise via the Soar commercial hub.

And there’s gold in them thar hills, apparently: The worldwide market for drone usage alone is expected to be worth a massive $127 billion by 2025.

“By using Ethereum’s blockchain technology, drone content can be verified and authenticated before it forms part of the Soar platform,” said the company in a blog post.

“This guarantees drone vendors that their imagery is ‘real’ and not a duplicate of something else.

“Soar adopts blockchain technology to record and add metadata to the blockchain in order to guarantee the image’s authenticity.

“As for guaranteeing a safe transnational environment for sellers and vendors of drone imagery, Soar uses Ethereum smart contracts, which are pieces of self-executing software that enable direct transactions to be made in full confidence and without a third intervening party.”

Founded in 2017 by Farhand, Soar’s goal is to build both a global map using satellite, ariel and drone imagery, but also a ‘decentralised global platform for the distribution and monetisation’ of that content.

To do that Farhand has assembled a team including chairman Guy Perkins (former co-founder of aerial imaging companies NearMap and Spookfish) as well as key management from a wide range of industry sectors including the Australian Special Forces, United States Air Force, Lockheed Martin, Rio Tinto, and NBCUniversal & Amblin Entertainment.

So far the company has collected almost 10 petabytes of data and hopes to ultimately be able to provide near real-time geospatial imagery at any scale – from low-resolution satellite to high-res drone imagery–- and sell that imagery via a single blockchain-based marketplace platform.

The company can currently provide imagery that ranges from 10m to 30m per pixel resolution, making it suitable for observing large-scale changes in urban areas, forests, farms, mountains, rivers and lakes. As the platform grows, Soar will seek to provide higher resolutions with a goal of resolutions as high as 20cm within the next 12 months.