News > Hands up who wants a microchip in their arm

Hands up who wants a microchip in their arm 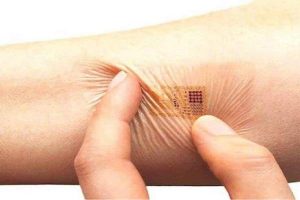 Punters are surprisingly open to the ultimate in biometric identification…

It’s the age-old question: ‘Who goes there?’

Proving who we are – and who that other guy is – is a dilemma we’ve grappled with, as a species, for millennia.

And now maybe we’re getting closer to a new way to answer that question.

Facial recognition and fingerprint software – and advanced new payment security protocols such as 3D Secure 2.0 – are approaching ubiquity, and with even the implantation of microchips into human subjects seemingly on the table, biometric identity verification is the hot new tech market.

Arm chips aside, we’re only at the front end of the curve.

The numbers are certainly there: Research from Juniper shows that biometric authentication tech is welcomed by merchants, consumers and the tech industry alike. According to the market researcher, biometric identity tech will hit 90 percent saturation for devices by 2024, by which time biometric authentication methods will account for around US$2.5 trillion worth of mobile payment transactions.

Much like the Juniper research, the report finds biometric technology set to explode, driven by big support from the younger generation. Globally, Gen Z consumers (18-23 years olds) are the most interested in these new payment forms, with 69 percent already using, or at least interested in using, biometric authentication to authorise a payment.

In particular, mobile wallets are reaching a tipping point with over 70 percent of Gen Z respondents either using or willing to use the technology.

But that’s just the start of it. Public opinion towards more radical forms of identification – such as human microchipping – appears to be softening.

Enthusiasm is particularly high in China, with 49 percent of Chinese survey participants saying they would at least be ‘interested’ in having a microchip put into their hand to make payments easier. GenXers (40-54 years) are particularly keen on getting the Black Mirror treatment (59 percent enthusiasm), followed by baby boomers (47 percent), and the elderly (17 percent).

Aussies, for comparison, are less compliant: Just 17 percent of those surveyed would be interested in such a proposition.

Not that we’re disinterested in bold new payment tech methods Downunder; quite the opposite.

“Australians are usually on the front foot when it comes to adopting emerging payment trends, and we have already seen a huge uptake in biometric payment trends like fingerprint sensors and facial recognition technology,” says Phil Pomford, General Manager for Global eCommerce, APAC at FIS.

Arm chips aside, we’re only at the front end of the curve, says Pomford. Expect further innovations, such as voice-activated commerce, to quickly enter the mainstream and be embraced by youthful consumers in particular.

Sixty-nine percent of Gen Z consumers are using or are interested in using biometric authentication to authorise payments, says the report, with Gen Z and Millenials most enthusiastic about making payment commands via smart speakers and in-car payment integration services.

“Convenience is king to today’s consumer, particularly the younger generations, who are more likely to adopt new and emerging technologies trends if it means they are rewarded with some level of convenience in return,” says Pomford.

“For retailers and merchants to thrive in the future, they need to consider broadening their payment offering in order to appeal to tech-savvy, digitally-driven consumers.”

Buy Now, Pay Later (BNPL) is also shown to be highly favorable with younger generations, while between half (51 percent) and two-thirds (67 percent) of the three youngest generations surveyed have purchased something off social media. The research also reveals that younger generations are ‘more comfortable with taking financial risks and taking on debt’, as well as being more open to ‘riskier investments’.

And there’s more to come. New biometric identity verification methods set to enter the market include high tech ‘vein readers’ and perhaps even authentication via heartbeat.