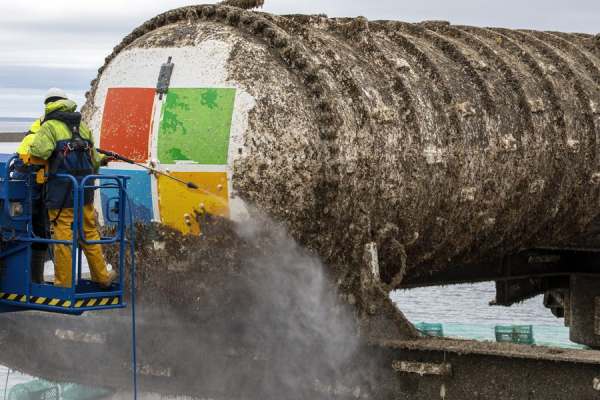 Microsoft’s Project Natick underwater data centre has resurfaced, complete with barnacles and sea anemone, two years after dropping to the bottom of the ocean, and the results suggest taking a deep dive might be a pretty good idea.

The two-year project has shown the concept of underwater data centres is not only feasible and logistically, environmentally and economically practical, but can cut failure rates significantly, Microsoft digital advisory services CTO John Roach says.

Underwater data centres are not only feasible but logistically, environmentally and economically practical.

The premise: A nitrogen-filled airtight container on the ocean floor could improve the overall reliability of data centres, reducing corrosion from oxygen and humidity, along with temperature fluctuation and bumps from people, and would have energy efficiency gains.

The portable flexible data centres could be dropped into the ocean along coastlines of areas which needed them providing improved local access to cloud resources – more than half the world’s population live within 200km of a coast, and latency is a key issue for data centres. In doing so, the data centres could provide a modular way of scaling up data centre needs while energy and operation costs low – land costs don’t figure and cooling costs (a key factor for data centres) are lower.

With billions being spent on data centres by companies including Microsoft, Facebook, IBM, Apple and Google, it’s no surprise that Microsoft is pushing the boat out in an attempt to find new options.

And a failure rate of just one-eighth of what it sees on land, is nothing to be sneered at (though servicing failed servers could prove challenging). The team behind the project, who have been analysing the data centre since it was pulled up several months ago, hypothesises that the nitrogen atmosphere, combined with a lack of humans to interfere and knock components, are the key factors for the difference.

Natick isn’t the first data centre Microsoft has dropped into the ocean – back in 2015, it dropped one off the coast of California in a 105 day proof of concept.

They’re also not the only ones looking beyond the custom built, land based data centre square.

In Norway, the Lefdal Mine Data Centre, created by IBM, Ritall and Lefdal, is home to a five story tunnel complex housing hundreds of container data centres, with capacity for up to 1,500 containers.

The data centre, opened in 2017, has taken the concept of data mining to new levels, with 75 chambers providing 120,000 square metres of infrastructure space with a potential total capacity of 200 megawatts.

Several other mine data centres also exist in the US, including the Bluebird Underground Data Center in Springfield, Missouri. Missouri, of course is tornado country, but fear not, Bluebird features no surface infrastructure and the mine offers some clear benefits against physical intrusion – it’s 85 foot underground with 65 foot of solid rock overhead and just one way in and out.

As for Microsoft and the future of Project Natick, the findings from the project will be used for land-based data centres, including informing decisions on how to make data centres more sustainable. But underwater will remain a focus with the company looking at how it can scale up the size and performance of the data centres by linking containers together. To power the full suite of Microsoft Azure cloud services, Microsoft says it may need to link together ‘a dozen or more vessels’ the size of the Northern Isles Natick test.