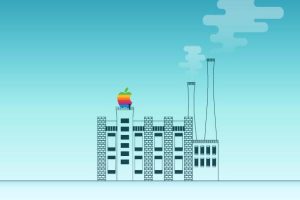 i-Devices products driving deeper into business (and space) use…

In the US 74 percent of enterprises already offer or plan to offer choose your own device (CYOD) programmes, which often favour Apple; in Australia Telsyte has estimated that around 70 percent of organisations offer either CYOD or bring your own device.

Spurring the adoption of Apple are the agreements that the company now has in place with Microsoft, IBM, and as of this week Deloitte, which has announced the formation of a dedicated “Apple practice” with over 5,000 advisors focused on leveraging iPhones and iPads in order to transform workplace practices and inject mobility into client operations.

This enterprise push will be important for Apple which is facing a series of market challengers in both the consumer and business sectors. Apple for example is clearly losing share in the smartphone market globally. Figures released this month by IDC have it with 13.9 percent of the global market this year, down 12 percent. Android has clearly won that war.

IDC also has Android leading the pack in tablet sales now and through to 2020. Apple currently is in second slot with 22.4 percent share compared to Android on 66.2 percent and Windows tablets with just 11.3 percent share. IDC, however, predicts that by 2020 Windows devices will take market share from the Android camp and be nipping at Apple’s heels with 19.3 percent share by 2020.

Dean Hager, CEO of Jamf Software, which sells specialist software to support enterprise IT teams managing Apple devices in the workplace, was in Australia this week, and believes that CYOD coupled with enterprise transformation initiatives hinged around mobile technology to drive productivity, will deliver Apple an increasing share of the enterprise market.

He said that it had taken Jamf 14 years to secure 6,500 customers by the end of 2015. In the year to date it has added a further 2,500 clients. One of its most recent wins is NASA which is sending iPads to the International Space Station, managed from the earth using Jamf.

According to Hager; “The force of iOS is not just user choice, but transformation of the work environment. Apple is now being used as a point of sale in retail, for lorry drivers’ daily logs. It is being used for business transformation.”

Hager said that Apple’s Device Enrolment Programme was also spurring the technology’s progress into the enterprise as it allowed IT managers “zero touch deployment” of new devices. Once an Apple device is powered up it connects to the DEP, which the enterprise can load with preconfigured services and applications, and be automatically populated with the apps the company nominates.