News > Motorsports takes to the skies

Motorsports takes to the skies 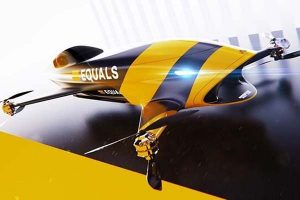 Racing may have turned to esports to fill the Covid void, but change is in the air…

When Enzo Ferrari noted that by competing with each other in-house his team ended up beating rivals, he probably couldn’t have dreamed that his words would be echoed by an Australian electric flying car (yes, you did read that right) maker as it gears up to launch the world’s first racing series for manned flying cars.

But Alauda, the Adelaide-based company behind the proposed Airspeeder racing series and the eVTOL (electric vehicle take-off and Landing) ‘speeders’ which will be used in the racing, says nothing drives innovation faster than competition and that the Airspeeder series will ‘turbocharge eVTOL technology and safety innovation, enabling the next aviation revolution’.

The launch of the flying Formula E racing could accelerate progress towards sustainable electric flying vehicles.

“We race for the industry,” Airspeeder’s site says, somewhat grandly.

It’s not a dream built on thin air, however. The company has just completed a seven figure funding round for the first motorsports program for electric flying cars, and says the launch of the flying Formula E racing could accelerate progress towards mainstream, sustainable electric flying vehicles.

Airspeeder itself is headed up by Matt Pearson, who is also co-founder and COO of Australian satellite startup, Fleet Space Technologies, which late last year secured $7.3 million in funding for the launch of its nanosatellites (some of which were launched by New Zealand’s RocketLab) for connected IoT.

Tests were reportedly due to have started in California’s Mojave Desert this year, but the pandemic has put paid to that, with Alauda now planning to have manned test runs of the Airspeeder kicking off later this year, once Covid restrictions lift, in South Australia.

Airspeeder says planning is underway for the first race in November 2020.

The Speeders themselves are a mix between a sleek F1 racing car and a drone, built specifically for racing. Powered by an interchangeable 500kw battery, Airspeeder claims they can reach a top speed of 200kph and offer the same power to weight ratio as a jet fighter. Augmented reality is used to assist the driver/pilot with navigation.

Alauda plans to provide teams with the MK4 speeders, currently still in final development,  which can then be modified by each team.

While eVTOLs might still seem futuristic dreams, plenty of analyst firms have been weighing in with big forecasts for the sector. In January, BIS Research forecast the eVTOL aircraft market to be worth US$524 million by 2025, growing to reach $1.9 billion by 2035, while Morgan Stanley is aiming even higher, saying the overall eVTOL market, including drone courier services and passenger eVTOL services, could total $1.5 trillion by 2040. Airbus has said it believes the eVTOL market will one day outpace its existing US$70 billion business and a number of startups have pulled in significant venture capital funding, with companies including Rolls Royce also among those pushing the technology.

Esporting nation
If the Airspeeder racing gets off the ground it will continue the big changes seen in motor racing since Covid struck. The sport turned virtual, using e-races to help fill the sporting void created by Covid-restrictions. Drivers have been racking their own virtual supercars from the comfort of their own homes – with some viewers noting the quality of the digital technologies deployed made it easy to believe you were watching real racing.

Esports itself is seeing growth, with New Zealand’s TAB reporting eSports are contributing about $60,000 of turnover a day after the TAB opened bets across several virtual titles recently.

It’s a further sign of the growing role of esports. Late last year Intel announced it will be hosting an Olympics sanctioned esports tournament in the lead up to the 2020 Olympics. With the Olympics now postponed, Intel has also postponed the esports version, which would have seen players competing in Street Fighter and Rocket League, with US$250,000 in prize money for each title up for grabs.