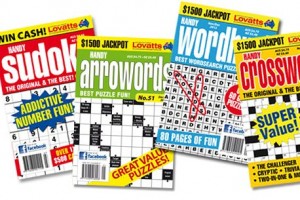 Crossword and puzzle publisher Lovatts Media has revamped its business model and migrated to cloud-based systems; IT department was scarcely involved…

The trend for an increasing portion of enterprise IT budgets to be commanded by managers other than CIOs has been demonstrated at Lovatts Media, an Australian owned puzzle company which produces everything from cryptic crosswords to Sudoku. The push to revamp the business model and the information systems to support it has been driven by Lane Russell, the company’s sales and marketing manager.

Russell said that the company is migrating to a subscription rather than sales model as part of what he described as a “clandestine business transformation”. He said that to support this transformation Lovatts had replaced many of its on premises computing systems with cloud based services.

The company uses Salesforce and Financial Force, Gmail, the Zuora Z-business platform to manage customer interactions and payments and plans to also move its web sites onto cloud platforms. According to Russell the only on-premises computer system to remain will be the content management system to host all the company’s intellectual property.

In terms of benefits Russell said that old invoicing systems took one employee three or four days a month to generate and issue invoices. That had now been automated by Z-business. Zuora’s platform also holds and securely handles payments data, such as client credit card details, using PayPal as the back end payments gateway.

Russell acknowledged using PayPal to facilitate payments was a relatively expensive approach but had delivered other efficiencies as “we don’t have five payment gateways to handle”.

Asked if the IT group had been involved in the decision Russell said, “I’m the one in control of the IT budget and probably the CIO as well”.

Russell is a prime example of an emerging trend being accelerated by cloud computing which is seeing more business users take control of the IT purse strings. According to Forrester 74 percent of IT budgets in 2011 were controlled by CIOs, by 2012 that had plunged to 58 percent.

Demand for subscription services is also a fast moving trend. Zuora this month released research commissioned from the Economist Intelligence Unit which found that 51 percent of businesses in the US, UK and Australia are developing new sales models, including subscriptions, sharing or retail agreements.

The survey – of an admittedly small sample – also revealed that Australian companies may be among the front runners with 66 percent of Australian respondents indicating they were moving toward this sort of model as opposed to a straight sales approach.