News > Taking robots to the water for on-demand autonomous infrastructure

Taking robots to the water for on-demand autonomous infrastructure 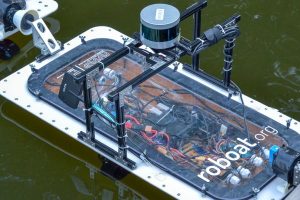 Forget autonomous cars, shapeshifting robotic boats may play a key part in Amsterdam’s waterways in the not too distant future, offering not just transportation but pop up bridges responding in real time to traffic demands.

MIT and the Amsterdam Institute for Advanced Metropolitan Solutions have been working on the five year research project and collaboration, dubbed Roboats, with a view to developing the world’s first fleet of autonomous floating vessels.

The project has the ambitious goal of re-imaginging urban infrastructure with cutting edge technologies.

“We can connect two sides of the canal using autonomous boats that become dynamic, responsive architecture that float on water.”

While MIT began testing the prototypes of the autonomous boats, which are equipped with sensors, thrusters, microcontrollers, GPS modules, cameras and a range of other hardware, back in 2016, they’ve now added an algorithm to enable the roboats to shapeshift, autonomously disconnecting and reassembling to form floating structures in Amsterdam’s canals.

Ultimately, Amsterdam wants the roboats to cruise its 165 canals, transporting goods and people, collecting trash and self-assembling into ‘pop up’ bridges to relieve street congestion, responding in real time to the ebb and flow of rush hour traffic.

The bridges could quickly break apart to allow ships through.

Individual roboats can also tessllate to form floating stages and public squares on the waterways.

MIT plans to use the roboats to create a dynamic bridge across a 60 metre canal later this year in what will be the world’s first bridge comprised of a fleet of autonomous boats.

“A regular bridge would be super expensive, because you have boats going through, so you’d need to have a mechanical bridge that opens up or a very high bridge,” says MIT professor Carlo Ratti.

“But we can connect two sides of the canal using autonomous boats that become dynamic, responsive architecture that float on water.”

LiDAR sensors and a camera, along with perception methods are used to enable the roboats to avoid other boats and to interact with other Roboats while docking. Motion planners help the roboats avoid collisions and select optimal collision free routes and a multi-vessel coordination platform, which includes communication and sensing, will enable autonomous latching of multiple roboats. The little vessels also use sensors to collect mobile measurements of environmental conditions including water and air quality and weather conditions at much finer spatial resolution than traditional stationary monitoring sites. That, researchers say will enable local policy makers to make better, data driven, decisions on environmental and public health issues.

In a paper presented at the IEEE International Symposium on Multi-Robot and Multi-Agent Systems, MIT researchers detailed an algorithm which enables the roboats to efficiently reshape themselves.

The algorithm handles all the planning and tracking that enables groups of roboat units to unlatch from one another, travel a collision-free path and reattach to their appropriate spot in a new set configuration.

Making the robots communicate and connect as a group was a key issue for the researchers. Enabling all the robots to locate each other and decide when to join or break apart required complex control techniques and a high level of communication, slowing down the robots and making them less efficient.

Instead, the researchers have created two types of units – coordinators and workers. One or more workers connect to a coordinator to form a single entity – called a connected vessel platform (CVP). Coordinators come equipped with GPS and an inertial measurement unit which computes localisation, pose and velocity, while workers have actuators to help steer the CVP.

The CVPs can compare geometric differences when shapeshifting to determine whether they need to move, or stay in the same spot.

While the experiments were conducted on quarter-sized roboat units, the researchers believe their trajectory planning algorithm will scale to control the full sized – four metre by two metre – units.