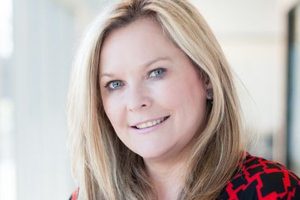 Salesforce has signalled its plans for big growth in the A/NZ region, with plans to add 1,000 new jobs in Sydney over the next five years and confirmation it will house them in a new tower complex in central Sydney.

The company already has more than 2,000 staff in Australia, where it counts big names including Telstra, National Bank Australia, Seafolly, Luxury Escapes and the NSW Government among its clients.

Pip Marlow (pictured), Salesforce Australia and New Zealand CEO, says after being in Australia for more than 15 years, Salesforce Tower Sydney is ‘taking that commitment to a new level and will allow us to have an even greater impact on our people, our customers and most importantly our community’.

Elizabeth Pinkham, Salesforce EVP real estate, was a little more direct. In a blog post about the new building, which Salesforce is heralding as one of the country’s ‘most sustainable buildings’, she says “Sydney, we’re here to stay!”

Matt Garratt, managing partner of Salesforce’s investment arm, Salesforce Ventures, has previously said that Australia is one of the vendor’s top markets.

In March the company launched a US$50 million Trailblazer venture capital fund for the Australian market, pumping funding into startups in its local ecosystem.

Garratt says Salesforce Ventures invests in companies globally to accelerate their growth with a view to delivering that innovation to its own Salesforce customers.

“That makes both the companies we invest in and Salesforce really successful.”

Among the companies Salesforce has invested in globally are Twillio, Dropbox and Mulesoft while in Australia it has backed companies including Bugcrowd and Sqware Peg.

The company hasn’t disclosed what the 1000 new roles will be ­– with the announcement of the new roles playing second fiddle to the building announcement, but its site is announcing ‘We’re hiring across all roles and teams!’

The new building will bring all of Salesforce’s regional employees under one roof in the heart of Sydney’s CBD.

The Sydney tower is one of 10 towers the company has announced in key markets globally, including its headquarters in San Francisco, towers in New York and London and the yet to be completed offerings in Chicago, Tokyo and Dublin.

The Sydney move was, unsurprisingly, welcomed by Stuart Ayres, Minister for Jobs, Investment, Tourism and Western Sydney, who says it shows the strength of the NSW tech and innovation ecosystem.

“We are focused on building and growing this sector in NSW and 1,000 new tech focused jobs in an iconic building located in Circular Quay will continue to drive this growth,” Ayres says.

Salesforce recently completed its US$1.75 billion acquisition of Tableau – the company’s largest ever deal.

As to that building, Pinkham says it will be ‘one of the most sustainable office campuses in Australia’.

It will also house the Ohana Floor on the top floor providing flexible open spaces for employees, customers and partners to use, while on weeknights and weekends the space will be available for non-profits and education groups to use at no cost.

“Salesforce Tower Sydney will be a catalyst in attracting and retaining the best talent to deliver transformative technology to help companies across the region to grow and scale,” Pinkham says.