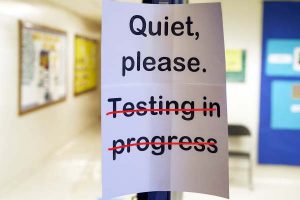 When failure to launch isn’t an option…

When it comes to ERP implementations there are lots of ways to fail.

“They are beasts of projects,” Pete Savage, Assurity business manager says wryly. “They are big programs of work and they’re quite often underestimated for a host of different reasons.”

Those reasons range from naivety on the part of companies who don’t understand big IT implementations to those who think the project is much smaller than it is.

And in many – or even perhaps most – cases, testing tends to get overlooked.

Testing – which as a rule of thumb accounts for about 30 percent of a program of work ­– comprises of multiple areas.

Functional testing requires an understanding of what the business does, the functions they need to perform and what processes are going to be configured.

“From a purely functional aspect, testing makes sure that A goes to B goes to C and C went to D.”

And that’s not just within the ERP system itself, but any other systems it interacts with, testing the end to end functionality.

There’s also what Savage terms the ‘non-functional’, covering performance – such as highest potential peak loads, or loading to failure – and security.

While cloud-based systems are an increasingly popular option, Savage cautions that while some companies see them as a silver bullet – pushing performance and security onto the provider and making it less of a problem for them – in reality they can make things ‘a little more complicated’.

He says clients often ramp up resources to cope with performance of cloud systems ‘but that becomes an expensive way of cracking that nut’.

While Savage is keen to see testing brought into any implementation from day one – he says it ensures everyone is on the same page and avoids covering old ground multiple times, among other things – timing the testing itself, particularly performance testing, is a juggling act.

“You want to do it as early as possible, but not so early that it wastes everyone’s time because if half the system isn’t configured or built and you test and something runs like a dog, well actually, you haven’t got the system you’re going to end up with anyway.

“What you want to look for is indicators that say there’s a database performing poorly or certain bottlenecks, but really you do performance testing in anger more towards the end of the testing when you think everything is there or thereabouts.

So what about the value of using a business analyst to do testing?

Savage agrees that, with their knowledge of a company’s business and processes, they can be an asset to any ERP project. But he cautions that it can be a time consuming process for a BA, and can detract them from their day to day job.

“Equally the testing mindset is a little odd – we like to break things and question why. You kind of lose that element of what happens if this happens, or what happens if?”

Savage admits knowing when to stop is just as important as the testing itself.

Instead, he says companies need to set expectations and priorities up front.

“What are your priorities, your critical processes, what do you need to ensure you can keep the business running? That becomes the focus. Then it’s almost like an onion ring: What is the next level and the next, until you get to medium to low priority and are comfortable going live.”

Data migration and automation frustrations
Of all the issues involved in ERP implementations, it’s data migration that Savage lists as the biggest.

“With any new system there is a migration from old to new, or multiple old to news, and that is normally a very big part of the program.

“We can configure and build a system as good as you like, but without the data in there it is pretty useless. And once you go from quite old legacy systems, the data quality can be beyond shocking.”

Taking data from multiple sources also throws up issues, including which data is the most up-to-date, what data needs to be taken across and what needs to be left behind.

A perhaps more surprising, frustration for Savage lies in automation – or more specifically a lack of understanding of its importance. It’s something he always recommends, he notes.

“The problem with automation and the way projects are normally run, is that it is quite an investment up front because you build the framework. There’s quite a significant cost, and projects that are aiming on a live date and a budget don’t necessarily like that.”

But automation, he says, brings longer term benefits, including time saving and keeping implementations on track.

“Often, if not always, when you deliver a large program of work like this you do it in iterations and you want to test phase one before going to phase two.

“Automation allows you to focus on the key parts of that previous phase, automate them and run them very quickly or overnight when you don’t even have to be there, and give you the reduced risk that anything is being impacted.”

When these regular drops come in, you want the business to be able to confidently take those new changes into production without a big overhead of manually testing that nothing has been impacted. And even better, to be able to switch pieces on that they think will add value to their business.”