News > The figures behind ‘an extraordinary time in internet history’

The figures behind ‘an extraordinary time in internet history’ 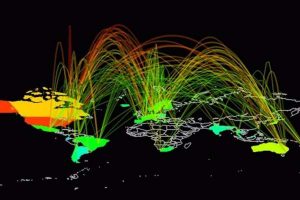 Global internet traffic up 30 percent, A/NZ business hour traffic soars 70 percent + – but we’re not about to break the internet…

Lockdowns around the world have seen internet traffic surge more than 30 percent globally – with New Zealand and Australian network providers reporting increases of more than 70 percent for traffic during traditional business hours.

Content delivery network and cloud services provider Akamai, which serves up a significant amount of the world’s online content logged a year’s growth in traffic in just one month.

Dr Tom Leighton, Akamai CEO and co-founder, says traffic on the Akamai platform grew more than 30 percent in March – up from a normal growth rate of around three percent for a typical month. Back in March 2019, traffic actually declined one percent.

“You’ve got a year’s worth of extra growth happening in a month.”

“Now here we have 30 percent growth in just one month – and there weren’t any big sporting events, this is just all the other traffic of everyone doing everything online now,” Leighton says. “It’s an extraordinary growth of traffic in a very short period of time.”

While traffic is often dominated by big media – streaming videos, software downloads, particularly of gaming software (each update on gaming software generates traffic equivalent to about 30,000 web pages, he says) – Akamai is also seeing the 30+ percent growth for ecommerce traffic.

Data from Akamai’s Prolexic service, which is concentrated on the commerce and financial markets, shows month over month daily growth rates jumping 30-40 percent by late March.

“You’ve got a 30+ percent increase in transactions, not just media traffic,” Leighton says.

“You’ve got a year’s worth of extra growth happening in a month,” he adds.

Leighton says in more than 20 years of looking at traffic levels, he’s never seen such a dramatic jump so quickly.

“During the holiday season we do see good jumps in traffic, but nothing like this. Across the board and pretty much in every vertical, for every kind of traffic and in every country impacted, you are looking at a 30 percent or more jump in a very short period of time, very clearly associated with people being locked up at home.

Akamai’s figures only tell part of the story. The company doesn’t carry YouTube, Netflix or Facebook on its network.

Steve Pettigrew, Chorus head of external communications, says network traffic in New Zealand has settle at ‘alert level four norms’. In late March – just over a week into level four lockdown ­– the ‘new norms’ reached a peak of more than double the 1Tbps baseline level recorded in the days prior to lockdown.

“Our graphs show that households are using 40 percent more data than before lockdown, Pettigrew says.

“We didn’t see any major differences in traffic during the day yesterday, when the majority of schools started online lessons for children,” he adds. That’s something attributed to the net result of students spending less time on YouTube, Netflix and gaming.

Evening data over the Easter weekend peaked at 2.66Tbps – down on the previous high of 3.03Tbps seen on March 27, when a Call of Duty release saw downloads spike. As a comparison, the previous high for the network, recorded during the Rugby World Cup 2019,  had been 2.6Tbps.

As to what the future holds – should New Zealand move into level three lockdown next week, enabling more businesses to trade online – Pettigrew says little change is expected.

“As more Australians work and study from home, we are starting to see network demand settle into a new range where network usage remains at higher levels throughout the day, compared to what we were seeing before self-isolation and social distancing measures were implemented,” says NBN chief customer officer, residential, Brad Whitcomb.

Both providers maintain the peaks remain well within their core capacity capability.

Last week the ACCC said daytime NBN speeds haven’t been impacted, with speeds also holding up well ‘on most evenings’.

ACCC chair Rod Sims attributed that in part to NBN’s temporary boost in network capacity, allowing RSPs to increase their capacity on the network by up to 40 percent at no extra cost, for three months.

The ACCC has granted interim authorisation for NBN and five retail service providers – Telstra, Optus, Vodafone Hutchison, TPG and Vocus – to work together on demand surge and consumer support packages. The group will share information and coordinate strategies to manage congestion, with the ACCC taking an ‘observer’ role. Sims cautioned however that the industry watchdog will be seeking ‘vigorous competition’ to drive the recovery ‘when it comes’.

Leighton meanwhile, says the internet should be able to continue to sustain the growth and scale.

“There is a lot of traffic out there and there are spots with some carriers in some cities under lot of stress. We are helping them,” he says. From Akamai’s perspective, that help comes in the form of its own edge solutions. Platforms including YouTube and Netflix are also moving away from HD format to relieve some pressure.

Says Leighton: “I don’t think the internet is going to melt down.”