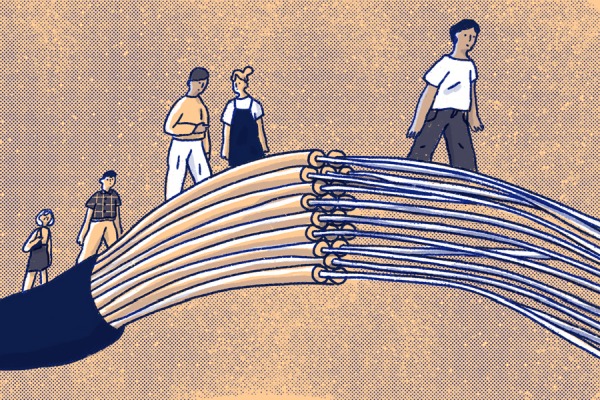 In a tale as old as the NBN/UFB rollouts, New Zealand has again trounced Australia in broadband download speeds, with Kiwis enjoying average downloads more than 40Mbps faster than that seen across the ditch.

NZ has average download speed of 67Mbps, while Australia clocks in at just 26Mbps.

That puts New Zealand above the OECD average of 53Mbps, and 12th in the OECD listing, while Australia lags well behind. 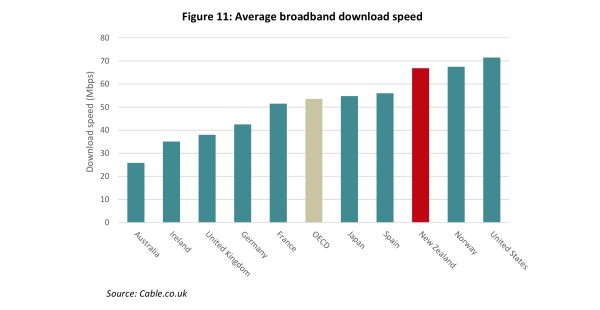 Australia’s NBN rollout completed in late 2020 and the 18 month countdown clock to switch is underway for those in NBN-ready neighbourhoods. After 18 months, existing landline and ASDL broadband will be switched off in a forced move to fibre.

Chorus – the main wholesale provider of the fibre network – is this year set to start trialling retiring copper for a ‘very small number of customers’ in areas where the fibre build is complete and uptake is ‘very high’. Steve Pettigrew, Chorus head of external communications, told iStart that there are about 220 customers who Chorus will be talking to about moving off copper by September 2021. There is a six month notification period for the change.

Fibre accounts for 57 percent of New Zealand’s internet connections (by 2023, 87 percent of Kiwis should be able to connect to fibre). Fixed wireless made up 13 percent of connections.

The NBN has been mired in issues. Most recently is the persistent talk that Telstra is gearing up to take over NBN. The telco has been furthering its restructuring plans which will see the infrastructure business separated off, creating two subsidiaries: InfraCo Fixed, for passive infrastructure on the fixed side and InfraCo Towers for mobile assets. A third business, ServeCo will handle products and services. This week Telstra announced a fourth unit, Telstra International.

NBN Co has been under fire for awarding AU$77.5 million in bonuses over five months in Q2 of last year, at a time of budgetary leanness and heightened scrutiny on spending by government owned organisations.

Unsurprisingly the Commerce Commission report also shows New Zealand broadband and mobile use accelerated during the initial Covid-19 lockdown in March 2020, with a 37 percent surge in fixed broadband data.

While most broadband technologies held up well, with the average download speeds holding steady despite the increased usage, fixed wireless broadband speeds didn’t fare so well, dropping by 25 percent.

New Zealand also led the way when it came to cost for unlimited data on 100Mbps connections. Pricing for broadband only connections for unlimited 100Mbps and Unlimited 900Mbps both fell NZ$10 year on year, while lower-grade services saw pricing increase between NZ$3 and NZ$12.

It doesn’t all go New Zealand’s way however with Australia streets ahead in mobile affordability. 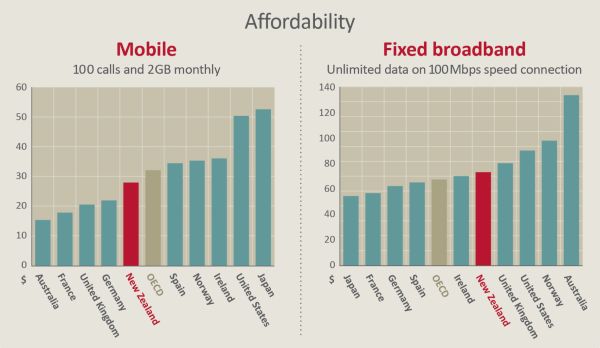 The Commerce Commission has been calling for increased transparency and the addressing of ‘inertia issues’ in the New Zealand residential mobile market.

Earlier this month it released an open letter to the main Kiwi telcos – 2degrees, Spark and Vodafone – noting agreed steps to address the issues, including providing customers with an annual summary of usage and spend along with a prompt to consider alternative options and the promotion of development of tools to enable more effective comparison and choice through the New Zealand Telecommunications Forum (TCF), which represents telcos.

With the release of the Annual Telecommunications Monitoring report, the TCF, was quick to highlight the growth in broadband and mobile usage, at a time when total retail telecommunications revenue fell by four percent.

Geoff Thorn, TCF CEO, says that reflects the impact of strong competition on retail prices as well as Covid related revenue losses in specialised services such as international mobile roaming.