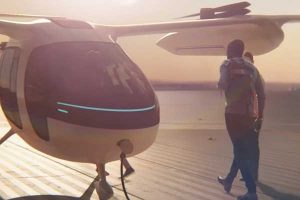 It might sound pie-in-the-sky but Uber has announced it will conduct trials of a new ride-sharing-in-the-sky service – its Uber Air concept – in Australia as early as next year, with plans to launch a full fledged air taxi service by 2023.

According to the company, Melbourne, Dallas and Los Angeles will be the first markets to offer the service with test flights scheduled to take place in each city some time next year.

“We have convened leaders across industry and government to build this future of urban aviation and begin testing in cities as early as 2020.”

Susan Anderson, Uber Australia and New Zealand general manager, says Australia was selected thanks to the government’s “forward-looking approach to ridesharing and future transport technology” and Melbourne – which beat out Brazil, France, India, and Japan – specifically for its “culture of innovation” and “unique demographic and geospatial factors”.

Auckland, which had been proposed as a trial city in an announcement last year, was overlooked.

The Victorian Government has signed a memorandum of understanding with the rideshare company around the deal.

“Uber is working closely with federal and local policymakers to develop an aerial offering that’s safe, quiet and environmentally conscious, and that extends the reach of existing transportation options,” says the company.

“We have convened leaders across industry and government – vehicle designers, manufacturers, investors, operators, infrastructure providers, policymakers and regulators – to build this future of urban aviation and begin testing in cities as early as 2020.”

The proposed aerial route for the Melbourne trial will cover a 19km route between the CBD to Melbourne Airport. The journey, which usually takes anywhere between 25 minutes and an hour by car, will instead take around 10 minutes and cost less than $90 according to Uber – around the same price as is luxury black car service.

At that price, one can imagine the queue time might quickly evaporate any airport transit time advantages.

Uber is working with several companies including Boeing for the ‘drone-like’ vehicle designs which will feature vertical take-off and landing, 240 kph cruise speed, 90+ km range and capacity for one pilot and four riders.

The company has also been working with its creative agency’s CGI developers, producing a video portrayal of what the service might look like, which appears a very long way from Boeing’s trial flight of its heli-plane air taxi format earlier this year.

Still, 2023 certainly seems close for the arrival of a commercial ride-share-in-the-sky service, doesn’t it? The prospect however might not be as outrageous as it first seems.

“The introduction of Uber Air in 2023 may feel way out of reach for many people, but I believe this is a feasible and exciting development in air travel,” says Matthew Marino, lecturer at RMIT University and researcher in unmanned aerial systems.

“The aviation industry is well developed, and various aircraft share the skies. Helicopters, general aviation and large commercial aircraft are all regarded as a safe and considered an acceptable form of transportation. A newer addition to the industry is the passenger carrying drone, and one which is being introduced at speed.”

Marino says that Australia is the perfect place for testing, especially given the country’s capacity for rapid development and continuous testing in the outback.

“We can be confident the technology will be properly tested and proven safe before the common citizen will be able to phone order an Uber Air trip across town.

“Google and other international bodies have tested new drone technology in Australia in a safe and regulated manner.

“The Uber Air taxi will be no different with extensive testing to improve the technology, efficiency and reliability.”

Even if the aircraft format, regulatory and safety aspects can be addressed, the audio impact may still present the major hurdle for commercial approvals. The high pitched noise levels from what amount to large drones can be expected to be deafening.