Compute accelerates to a 5G edge 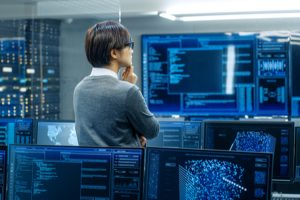 The edge of the network is increasingly becoming home to the ‘data centre’ of tomorrow with 5G accelerating the move according to new data centre industry research, which also highlights the lack of progress being made in the greening of the sector.

The new report highlights the changing nature of what constitutes a data centre – those powerhouses that deliver the cloud computing each of us uses (and takes for granted) every day in both our work and private lives. It shows modern data centres are undergoing a rapid migration to the edge, as compute resources move from on-premise enterprise facilities to hyper-scale public cloud and now to increasingly distributed and dynamic data centre networks.

Edge was a ‘growing’ trend back in 2014, but it merited just four mentions in the original 19-page report, with attention back then firmly focused on hybrid architectures leveraging enterprise, cloud and colocation resources. Now the network edge is being ‘repurposed and expanded’ the report says.

With more data being generated and consumed at the network edge, particularly with the proliferation of mobile sensors, mobile networks are increasingly under strain. Mobile IP traffic was projected to increase seven-fold from 2016 to 2021 – double the pace of growth for fixed IP traffic.

That’s one of the drivers for compute and storage to be closer to the users and devices in the form of distributed mini and micro data centres, with Vertiv saying the growth of edge and the ‘dramatic impact’ it will have on the data centre is ‘staggering’.

The survey of 800 experts in data centre operations included 494 respondents who have, or expect to have, ‘edge sites’ by 2025, among whom the total number of such sites today was 128,233, with respondents forecasting that number to increase 226 percent to 418,803 in 2025. Fifty-three percent expected the number of edge sites they support to grow by at least 100 percent, with 20 percent expecting an increase of 400 percent or more.

“It’s clear we are at the front end of a significant shift not necessarily away from centralised computing, but toward edge computing,” Data Center 2025 says. “We expect managing the growth in edge computing sites to be the single biggest challenge – and opportunity – data centre professionals face between now and 2025.”

The edge growth is expected to be accelerated by ‘what may turn out to be the most significant technological advance’ of the second five years of the Data Center 2025 timeline: 5G, which promises to enable data intensive use cases, while reducing the cost of using mobile networks by performing processing at the edge.

The explosion of sensor data serves no purpose unless it can, almost instantaneously, be interpreted and made meaningful to applications or users. And that is where edge computing comes in.

“Broadly it will enable some of the biggest innovations coming in the next five years,” he says.

“Specifically, to our industry, it will require data centre operators to rethink their fundamental network architecture as they transition from core-heavy architecture to architectures that are more balanced between edge and core.”

In other findings, there was little talk of driving new efficiencies and improvements in machine efficiency, with the report noting server, infrastructure system and management tools have progressed ‘somewhat predictably’.

Green issues may have been de rigueur in the sector just a few short years ago – and the 2014 report reflected that with participants bullish about the prospects for renewable energy sources – but expectations have changed significantly. Back then, they believed 34 percent of data centre energy would come from solar and wind power by 2025. That number has now plunged to 21 percent. Even that is ‘ambitious’, Vertiv says.

“We are likely not close to advancing at a pace that would put us on course to meet even those reduced projections.”

Hydroelectric, interestingly, seems to have jumped into the fray in this year’s report, with participants expecting it to be the largest energy source for data centres come 2025.

Data centre PUE (power usage effectiveness) has been stagnant since 2014 – highlighting a sorry lack of success on the part of engineers in building more efficient systems. In comparison, overall PUE had dropped from 2.5 in 2007 to slightly above 1.5 in 2014. The optimum theoretical level is 1.0 – which effectively means no other power is required to run a data centre.

The report does, however, note that IT asset utilisation is currently ‘a great untapped resource’ within the data centre ecosystem.

The optimisation of compute resources and intensive use of virtualisation within cloud facilities results in utilisation levels that are projected by respondents to reach closer to 60 percent by 2025.

“If this projection is to be realised, it will almost certainly come via continued growth in hyperscale and cloud operators, which typically achieve significantly higher utilisation rates based on the varying needs of multiple users.”

“Higher utilisation rates are baked into the value proposition of public cloud providers, but my experience is that utilisation is a major concern across the industry,” says Vertiv global power sales VP, Peter Panfil.