News > What CEOs fear the most

What CEOs fear the most 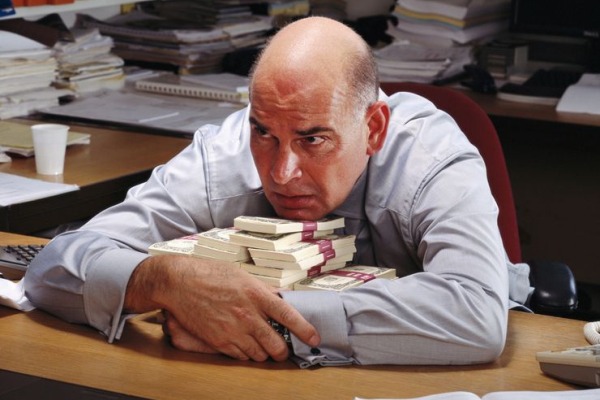 A year on from Covid-19 being declared a pandemic, CEOs are voicing record levels of optimism around recovery – but cybersecurity and misinformation are keeping them up at night, and for Australian CEOs there’s another threat to counter…

The annual PwC Global CEO Survey shows CEOs are surprisingly optimistic in the face of the pandemic and an inevitable bounce back of some kind – or perhaps it’s the promise of a vaccinated planet. Either way, optimism is on the up, with 76 percent of global business leaders predicting economic growth will improve in 2021 – nearly 20 percentage points higher than the previous record high for optimism.

In Australia (sorry New Zealand there’s no Kiwi-specific breakout), 70 percent of CEOs are expecting global economic growth to improve this year, with 88 percent expecting revenue to increase, and 85 percent expecting that to translate into increased profitability. Longer term, 92 percent expressed confidence for the next three years, ahead of the global average of 88 percent. 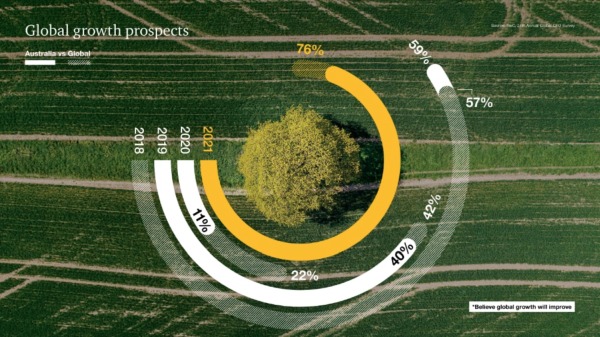 It’s a huge change from last year when the survey – conducted pre-Covid in October 2019 – saw record breaking levels of pessimism, with Australasian CEOs among the most pessimistic. Back then, 51 percent of Kiwi and 32 percent of Australian CEOs were expecting global economic growth to decline over the following 12 months.

PwC’s take on Australia’s upswing in positivity? It’s unsurprising given the international recognition Australia has received for its handling of Covid-19 and an underlying sentiment that the economic impact is unlikely to worsen.

Not everything is rosy though. With rising digitisation comes increased cyber risks, and CEOs around the world are worried. For Australian CEOs it’s now the top concern with 95 percent citing cyber risks as their biggest threat to business growth.

Globally cyber is the number two concern, behind pandemic and health concerns.

That cyber concern is seeing money flowing into cybersecurity and data privacy investments: 78 percent of Australian, and 72 percent globally say they’ve increased their long term investment in those areas. And 77 percent of Australian CEOs and 59 percent of global CEOs have factored cyber threats into their strategic risk management activities too. 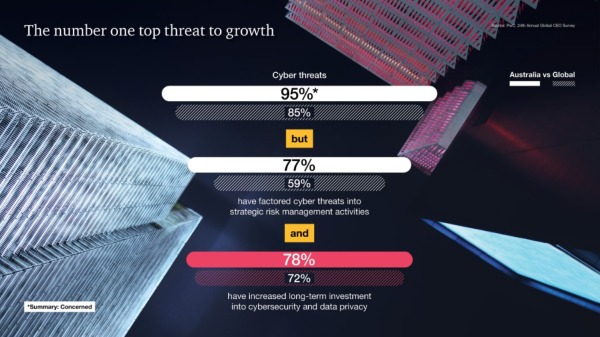 Mergers and acquisitions are coming to the fore with government support such as JobKeeper ending and CEOs eyeing potential acquisitions. Others are looking to pivot into new markets, buy in related markets or purchase complementary businesses to add to their technology or logistics capability.

Also rising rapidly on the list of CEOs’ concerns is the spread of misinformation. Sixty-seven percent of Australian CEOs cited it as a threat to growth, up from 43 percent last year, while globally 28 percent are ‘extremely concerned’.

“For business leaders who need to build back this trust, being transparent about the efficacy of products and sharing data can help.”

“While the pandemic has forced more businesses to rapidly digitise their offerings, they were often catering to static audiences,” PwC says.

“With consumer habits now altered, there’s a window of opportunity for businesses to empower consumers through personalisation, so that they actively choose to continue transacting digitally and don’t ‘jump ship’ to a competitor. With increased digitisation, the cost of change decreases. Businesses will need to differentiate through a laser focus on customer experience.”

Increased investment is certainly the name of the game for 79 percent of local CEOs when it comes to digital transformation, with the pandemic apparently forcing them out of their comfort zones (only 62 percent are now concerned about the pace of change, down from 73 percent last year) and helping grow their confidence.

Investment is also on the up for digital transformation globally, with 49 percent planning an increase of more than 10 percent. 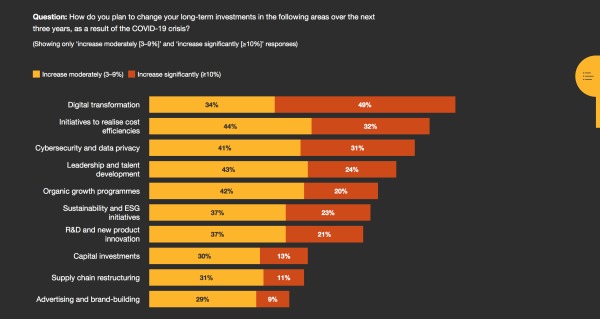 But PwC notes a lack of ability on the part of Australian businesses to pinpoint projects and track the progress of investments – a critical factor when businesses want quantifiable results.

Just 26 percent of local CEOs are significantly increasing their focus on digitising risk management functions this year (compared with 47 percent of global CEOs), the report notes.

“For many, a strategic rethink on this may be required.”

Hidden in the figures there’s also a non-tech red flag for Australian CEOs, with a strong decline in the number of Chinese CEOs looking to Australia as a potential growth market. When asked which countries they considered most important for overall growth prospects in the next 12 months, just 17 percent chose Australia – a whopping 28 percentage point drop on last year, when 45 percent were eyeing the market. Given the strength of the Australian market globally, that’s surely a signal of a change in sentiment – likely based on the ongoing tetchiness of the Australia-China relations – rather than tangible market conditions.