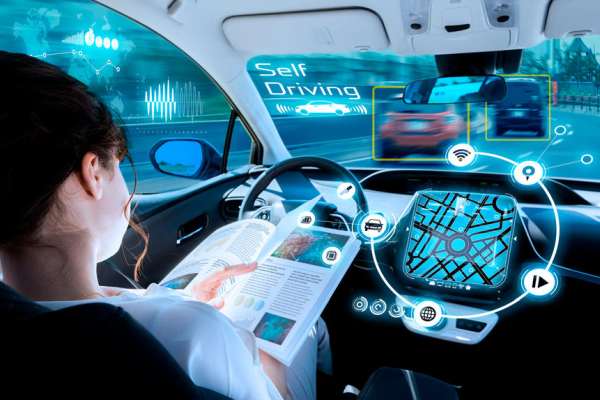 What needs to happen before it happens…

You could be forgiven for feeling as if the revolution has been delayed. Weren’t we supposed to have super smart, hyper-efficient self-driving cars by now?

Sure, we’re beginning to see some on-road testing, but that fully automatic, level five car that can operate with no human intervention required at all? That’s still very much a work in progress.

It’s a big project of course. We are talking about a hunk of steel speeding down public streets with nothing but AI smarts to prevent catastrophe after all – but it’s not just delays in the tech holding things up.

“Significant challenges have to be addressed in order to be able to realise the full benefits of autonomous vehicles.”

According to a new report by KPMG, Australia’s lack of manufacturing chops – plus a lack of investment – is ruining the country’s chances of competing in the great smart car race. The report finds Australia limping into 14th place (out of a possible 20 countries) for ‘autonomous vehicle readiness’.

“Autonomous Vehicles (AVs) are poised to revolutionise not only transportation but the way people live and work throughout the world,” says Paul Low, KPMG transport management consulting partner.

“The mobility freedom provided by AVs will have a transformational impact on society. But with the tremendous opportunity comes significant challenges that have to be addressed in order for Australia, and other countries, to be able to realise the full benefits of AVs.”

“It is crucial that state and federal authorities collaborate so we can establish a universal platform to support AV transitioning across the nation.”

New Zealand fares better in that report, coming in at a much more respectable ninth place and that might be in part thanks to several key pieces of legislation – including the Intelligent Transport Systems Technology Action Plan 2014-18 – that shows Kiwis taking a strategic approach to encouraging and enabling advanced driver technologies. That document takes a broad approach, addressing among other things, sensors, computing and communications in transport infrastructure, as well as driver assistance, traffic control and vehicle monitoring, and proposing a “high-level, multi-agency approach to the introduction of new intelligent transport systems.”

And while Australia surely has similar aspirations, so far the Government is taking a more laissez faire approach to making it so. In May the Ministry of Transport announced it’s underwhelming new legislation – due to be in place by 2020 – entitled Changing Driving Laws To Support Automated Vehicles.

The paper proposes the introduction of new laws that will allow automated driving systems on the road, set out obligations associated with such a thing (as in ‘who’s responsible if it goes wrong) and provide “flexible compliance and enforcement options.”

“With automated vehicles, there will be times when an ‘automated driving system’, rather than a human, will be in control of the vehicle,” says National Transport Commission (NTC) CEO Paul Retter.

“We need a nationally consistent law to know who is in control of a motor vehicle at any point in time… Without a change to existing laws or a new law, there would be no-one to hold responsible for compliance with our road rules when an automated driving system is in control of a vehicle.”

For better or worse, it seems the market will have to lead the way in Australia.

And at least on that front there is some hope. Beleaguered peer-to-peer ridesharing and would-be self-driving car pioneer Uber who has recently struck a deal with Toyota, yesterday announcing a US$500 million investment in Uber as part of a project to get self-driving cars picking up Uber passengers by 2021.

“Our goal is to deploy the world’s safest self-driving cars on the Uber network, and this agreement is another significant step towards making that a reality,” says Dara Khosrowshahi, Uber’s CEO. Uber’s advanced technology and Toyota’s manufacturing prowess make this partnership “a natural fit” says Khosrowshahi.

That’s a decent investment and some sort of progress towards the fully-autonomous end goal but it does little to address perhaps a more pervasive problem for the industry. With two fatal accidents involving self-driving cars still fresh in the memory, the average man on the street simply does not seem to have a great deal of faith in car makers’ ability to create a product that is actually safe.

And that PR problem shouldn’t be underestimated. In New Zealand a new Trade Me Motors survey finds Kiwis nervous about encountering autonomous vehicles on the road.

“People are most worried about the vehicles being hacked, along with the legalities around liability if the car crashed. All in all it seems self-driving cars will need to clock up a fair few kilometers of trust before Kiwis are OK with them on our roads.”