How the All Blacks use player data to keep winning 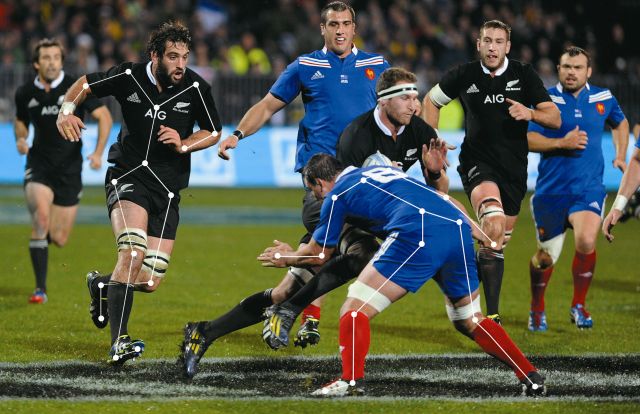 Most people are aware that rugby has changed dramatically since the sport became openly professional in 1996. One of the most radical changes, and perhaps the one that is least widely understood by the public at large, is the degree to which decisions regarding player selection and coaching, and the development and application of team tactics are now data-driven.

Coaches, players and referees in the modern game now spend many hours analysing their performance and that of the opposition. Administrators need information about players for purposes of contracting, remuneration and personal development. New Zealand Rugby (NZR) is an accredited employer under the ACC scheme and collects information about player injuries for the purposes of treatment, rehabilitation and injury prevention research. Information regarding player strength, fitness and body composition is also routinely collected.

The field of performance analysis in rugby is developing rapidly. Much of the player-related information held by NZR has, in the past, been stored in bespoke systems and reported using off-the shelf products such as Microsoft Excel. NZR has recently been trialing an enterprise-wide data visualisation and analysis system (SAS Visual Analytics) with the intention of providing information to those who need it more quickly; developing a new suite of reports based on greater integration of various data sources; and enabling end-users a greater degree of interactivity with respect to reports and visualisations.

NZR has obtained in-depth ‘code’ for over 250 top-level matches every year since 2000. Commercial coding organisations record every action that takes place on or near the ball, where on the field it occurred, when it happened, and which players were involved, along with various ‘qualities’ of the action. Each match results in 2000 to 4000 observations, or lines of code.

The information gathered is used in two main ways. Firstly, the code is linked to video of the matches. Multiple views are typically available for each match, and coaches and players can select any given element of a match as required – for example they can look at all of the tackles made by particular players in a match, or the attacking tactics their opposition have used from scrums over all of the matches they have played in a given competition.

Secondly, the data obtained is aggregated into databases, and analysed using various statistical software products. Information about the relative performance of players by position, by team, and by match is made available to coaches via a series of reports and dashboards.

Although some of the statistics are similar to those shown to television viewers, many are quite different.

For example, a raw count of tackles made by a player provides no information about the context of those tackles. Were the tackles a player made effective and did they help the defensive team shutdown the opposition attack? Did the player miss tackles, or was the tackle a heroic effort to save what another player had missed?

Often the information is used as a means of quickly identifying potential issues. The best coaches and players recognise the strengths and limitations of the data, and their decisions are informed accordingly.

As with most other businesses, NZR operates in a highly competitive environment. Having the right information in the hands of those who need to make effective decisions as quickly as possible is essential. The challenge for us is to stay abreast of, and hopefully ahead of, our competitors by converting the large amounts of information captured into useful, relevant and succinct reports to assist decision-making. The better we are at doing that, the better chance our teams have of staying on top of their game.

Ken_QuarrieDr Ken Quarrie is the Senior Scientist for New Zealand Rugby, and has been with NZR since 2000. Ken is responsible for analysing and reporting information on player and team performance, and patterns of injury. He lives in Wellington.