Feature Articles > Where did you buy your software?

Where did you buy your software? 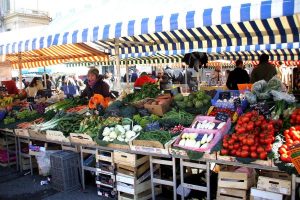 The proliferation of software and apps has created its own need for farmers’ markets in cyber space, and they are hot property right now…

In 2003 Apple launched the iTunes Music Store and the world shifted. It wasn’t a seismic shift, more of a surreptitious changing of the points at a railway junction, and it set society and business on a new course. We were now on the path to disruption; businesses models, delivery channels and pricing structures would change in response to the online marketplace. While the music industry was the most immediately and directly affected, it would not be long before other radical thinkers would turn more industries on their heads.

Cloud CRM provider Salesforce was one such firm, spinning enterprise CRM in a new direction and into the cloud. In 2005 it launched its AppExchange – an online application marketplace for third-party applications that run on its Force.com platform, which, more than ten years later boasts 2,500-plus third party applications and close to three million installs. Today it is one of the yardsticks by which software enterprises measure their marketplace success. The thing is, now there’s many, many marketplaces. Some of them are just aggregators which provide feature and price comparisons, but the true marketplaces offer full provisioning, subscription billing and ongoing maintenance through their platforms. The marketplace for marketplaces is hot.

“The centralised experience of the marketplace makes it easy for customers to find, buy and use software. This is one big reason why 76 percent of Fortune 100 companies that offer third-party software also operate a marketplace,” said the report.

Kiwi cloud based retail software company Vend has had great success both in selling through marketplaces and building its own marketplace ecosystem. Vaughan Rowsell, founder and director of Vend, told iStart that a marketplace is a great place for apps to be discovered, as long as it is active. Metrics for measuring marketplace activity include number of visits, number of downloads and the size of the marketplace. Although, Rowsell comments that you shouldn’t discount a marketplace for being small – it might just be niche or that you have fewer competitors. However, app vendors shouldn’t expect magic even from an active marketplace. For real success, you have to invest time in encouraging your passionate customers to post reviews and testimonials because that “holds a lot of weight”.

“The centralised experience of the marketplace makes it easy for customers to find, buy and use software. This is one big reason why 76 percent of Fortune 100 companies that offer third-party software also operate a marketplace.”

In the end though, all a centralised marketplace can do is fill your sales funnel – you still have to talk to customers and go through the sales process, Rowsell warns.

There is clearly a growing hunger for centralised marketplace experiences at the user end. Grant Thomson, vice-president for enterprise for Salesforce in A/NZ, says that while his company pioneered the marketplace for the enterprise and is probably more successful than most, he has seen more change in the application marketplace landscape in the last few years than in the last 20.

“I think the world is changing and the customers themselves are trying to change the procurement process,” he says. Thomson was careful to stress that you cannot do away with control around probity and security, but application marketplaces do make it very easy to try the ‘suck it and see’ method of choosing an application. It certainly speeds up the decision process in one way as you can try it out for a couple of weeks, and if it doesn’t work, it’s no biggie, just move on to the next.

The problem is that most of these marketplaces belong to a software vendor who has a vested interest in keeping its own offering at the centre of your solution design. All the apps in its marketplace should integrate with it seamlessly, and the better ones will integrate with each other. But what if you find the perfect app from a competitor’s ecosystem? A lion cannot survive in the desert, no matter how powerful his roar. It’s effectively ecosystem lock-in. That’s why Thomson says the next hurdle is to get different marketplaces integrating. He thinks that will happen but it will take time.

In the interim cloud-broker businesses are starting to pop up to great effect. Take 9spokes, for example. It is a value-added broker of cloud services which picks the best applications to support what it views as the nine processes needed to run any business and serves them up as a package deal, with custom-built integration to other apps built if required. In an interview with iStart, founder and chairman Adrian Grant said 9Spokes solves the problem of which apps to choose and how to manage and make the most of them. It offers users an interface that streamlines administration, makes choices easier, provides access to meaningful operational data, and helps make sense of businesses in comparison to peers. Its app catalogue runs to 52 solutions including all the usual suspects such as Xero, Vend, MYOB, Dropbox etc, but Grant said that they are very selective of which apps make the grade.

It’s this new type of marketplace which we suspect will rise in popularity as enterprises seek to retain control over their choices. 9Spokes is not the only company that is offering this sort of service, as Grant pointed out in the interview, but “the fact that other companies are looking at how to address the same issue validates what we are doing,” he said. (Read the full interview here.)

PwC is just one of the companies offering something similar to its customers. Its PwC Next solution, which it launched for its clients in March, is a purpose-built cloud platform that brings together more than 60 cloud solutions on one customisable dashboard that is accessible anytime, anywhere with a single log-in. Clients can mix and match what tools they need to run their business without having to deal with multiple platforms.

Cloud-broker businesses are starting to pop up to great effect.

It would seem that everyone is attempting to clamber on the bandwagon this year. In February, SAP made generally available its Hybris-as-a-Service (known as YaaS, which stands for Hybris business platform as a Service… we guess HBPaaS wasn’t as catchy) a marketplace for what it calls micro-services, centred on its Hybris e-commerce engine. It allows any registered business or developer to quickly add new business capabilities to existing applications by subscribing to SAP’s APIs. And apparently there is no vendor lock-in. Hybris CEO Carsten Thomas calls it more of a “framework” than a platform. Technology commentator Ben Kepes attended February’s Hybris SAP Summit in Munich. According to him, writing in the US edition of Computerworld, the company “is suggesting that ‘first-generation’ cloud marketplaces, in particular Salesforce’s Force.com, are limiting in that they assert too much control over the ISVs in terms of languages and approaches to building products”. Kepes mused whether this was really the case, especially when it comes to Salesforce. It’s hardly a surprising position to take. The ‘master vendors’, SAP Hybris included are, after all, not creating these environments for the good of the ‘open source’ global business community, they want their solutions to be the centre of the universe.

As we can see from PwC’s foray into a sort of marketplace-cum-dashboard thingumajig, it’s not just software companies that have marketplace-type offerings. Today, other industries are trying to differentiate themselves through the ecosystem model as well, in particular telcos. Telstra has run its T-Suite app marketplace since 2008, which currently has 44 apps on offer, followed by a half-hearted attempt from Spark (apps.sparkdigital.co.nz with a rather feeble-looking four apps).  Word is, however, that both are about to be reinvigorated as service delivery and on-boarding processes improve on the marketplace platform they both use. Rumour has it that both telcos will plough millions of dollars into initiatives to provide OTT services for business.

“For anybody who has bulk relationships with small business, firing up a marketplace makes sense.”

“It’s an interesting move from the telcos to start to provide non-core business, moving away from line rentals to selling software subscriptions to small business,” said Rowsell, who added he will not be surprised if the banks are next.

“For anybody who has bulk relationships with small business, firing up a marketplace makes sense because they have the customer base,” he says. And, if they have frontline sales staff who are having conversations with customers, that is good news for technology companies in those marketplaces.