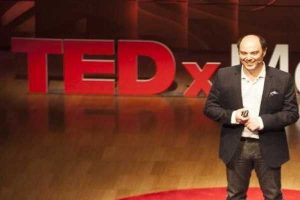 How AI, Blockchain and even those damn chatbots are going to shape the future…

Blockchain this, AI that. Things are moving fast, so, in the interests of bringing you the news before it happens, we cornered Melbourne-based business futurist Morris Miselowski to find out what key technologies are going to change the business landscape, how best to prepare for the future shocks they’re bringing with them and what it all means for our day-to-day 20 years from now.

iStart: Hi Morris. Thanks for taking time to talk to us. From your perspective, what’s the technological lay of the land right now? How would you describe the zeitgeist in a technology sense?

Morris Miselowski: Right now I feel like we are really moving from what I think of as a Wizard of Oz, black and white type scenario into full technicolor. We’ve spent the last 30 years laying down the pipes and getting to terms with what this new digital space is, doing the ‘oohs’ and ‘ahhs’, but I don’t think we’ve used technology in a particularly purposefully way yet. It just hasn’t been very human-centric. So I think we’re on the cusp of something huge.

You’ve been in the prediction game for a while now. What’s changed?
‘Im seeing a very different landscape emerging for the first time in about 20 years, a landscape where technology is pushing back into the realm of the human-centric. It’s a fascinating conversation and one more people are willing to have. For the last 20 years all people wanted to talk about was the tech toys. Now the conversation is becoming about humanity and how humanity can use these tools more purposefully.

How do you see that evolution playing out in industry?
So the nature of work is the big conversation of late. What’s changing is that we’re finally pushing past the industrial revolution, with the way we look at work is changing to a more human-centric view. There’s that word again.

A lot of the work we’ve done over the past 100 years has been repetitive, insular work; one task turned into a job for one person for life. Now we’re finding that we no longer need to look at things like that because we have technology that can recreate much of that human physical activity, picking up things, moving things, packing things. The big shift is now we’re finding ways of doing the heavy lifting of thinking.

And that brings up the spectre of displacement, right?
Well what have traditionally been called white collar jobs are now starting to disappear and many of the people that have those jobs have not foreseen this new horizon. So we’re now starting to see the work of accountants, bookkeepers and lawyers – all of those venerable jobs which have previously been considered as sacrosanct – being challenged by artificial intelligence.

But we’re also seeing the nature of work itself evolve to no longer requiring a person to be at a job at a particular time and place. Work can instead happen when and where appropriate. We’re moving to a ‘no collar’ situation, where the task dictates how and where it is done and technology is the backdrop that’s allowing that to happen.

Some things will always need the human touch though, right? People still hate chatbots, don’t they?
Many customers do report a dislike or a fear of chatbots, but many of them will have actually used a chatbot recently without even having known it. That fear is similar to how many people felt 15 years ago when we started to talking about online banking: ‘Oh, it will never happen; not in my lifetime; I’m not doing it’. Now close to 90 percent of all retail transactions in Australia and New Zealand are done online and we don’t give two thoughts to it. And the thought of standing in a queue in physical bank makes our stomach turn.

At the moment chatbot technology may be a little immature, a little cumbersome, but they are also the next step in our evolution in this space. We’ve had keyboards, we’ve had the mouse, but where are the other great interaction tools?

What we’re moving to now is more a human interface, that speaks and understands in a way close to our natural language. It guesses, hypotheses, figures out what we want or the meaning behind a question and gives us that answer. We, as humans, want that. We like it when things do things for us.

And we’ve got to touch on Blockchain.
Blockchain is another one of those things that has a bit of a scare factor, with most people not really aware of what it does. They think of it as cryptocurrency, or a new form of the New Zealand or Australian dollar, but it’s so much more than that – it’s the new digital backdrop of business. It will ensure things – money transfers, titles, things of value – are done with more honesty and transparency and truth.

It’s a brand new space that doesn’t have many rules or regulations at this stage and doesn’t have a clear player, so it opens up a horizon of huge possibilities. It’s going to change the face of so many industries.

I’m detecting an ever so slight hint of optimism in the way you think about these things…
I am an optimist about the future, but it’s not Pollyanna stuff. My mindset is this: technology is always benign, it has an off switch and where it doesn’t, get a brick and smash it.

And I don’t think technology is, on its own, the answer. What scares me is humanity’s use of technology. What we’re doing, as we always have, is evolving technologies that can be used for good or evil. AI is a great example of that. It really has that possibility of being used in all sorts of spaces where we would not, as humans, wish it to be, but, on the other hand, it has so many possibilities that I think we need to get welcome it.

So how does industry actually prepare for the challenges we face? Is there a roadmap?
The landscape is changing. Notions around work are changing, what it means to be a human, how we live together as families, all of these things are changing irrevocably, and we are not really ready for that.

So it has to come back to leadership, and here I’m talking to CEOs, CIOs, anyone from the C-suite. Leadership is of vital importance. We need to redefine what leadership is, because the workforce of tomorrow, and what that might look like, is a huge question.

What’s important in this space is to get to the core of who we are as a business and many businesses are not really able to define that. It’s not something you can answer with a product or a service or a mission statement.

But once you do have an idea, you can begin to evolve, and you can start looking for the technologies ahead that are going to be important to you.