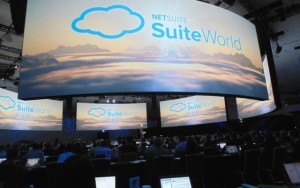 Microsoft CEO Satya Nadella (via video) introduced this as the first announcement of several included in NetSuite CEO Zach Nelson’s opening Keynote at SuiteWorld in San Jose this week.

The deal will see NetSuite migrate off current host Amazon Web Services and on to the Azure platform, and Office365 will be integrated into NetSuite. This will allow data to be extracted directly into Office tools such as Excel or Power BI.

A single sign-on service for customers who use Azure Active Directory is already available.

The move demonstrates an openness between the two organisation which have traditionally competed on the ERP front – Microsoft’s Dynamics Great Plains and Navision vying with NetSuite. “The cloud makes for strange bedfellows,” said Nelson in the media briefing following his address.

NetSuite’s CMO Fred Studer facilitated the conversation after moving from an eight-year tenure in senior product roles at Microsoft, including managing the Dynamics team.

“Dynamics is a lesser focus for Microsoft. They are much more intent on opening up Office365 and building Azure so they were open to engage,” said Nelson.

The migration will occur progressively over the course of 2015. As part of the wider deal, all of NetSuite’s 4000 staff will migrate to Office365.

In other announcements, Amex Global Business Travel (GBT) is to become NetSuite’s largest customer as it undergoes a spin-out from American Express and replaces its financial systems. This also included a deal whereby the NetSuite community can access favourable GBT pricing on flights and accommodation.

An extension to NetSuite’s POS system will mean full customer details can be accessed on tablets right through to payment. This will facilitate shop assistants working with customers on the shop floor.

The acquisition of Bronto has allowed its marketing automation suite to be integrated in to the overall architecture of NetSuite. Bronto has a strong reputation among online retailers for email marketing integration with e-commerce systems.

An eProcurement module has also been added to the suite introducing shopping basket-like functionality to procurement processes across departments.