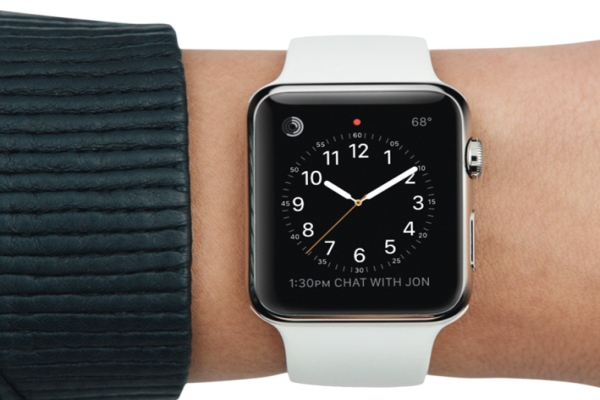 Apple’s Watch pointedly plays to the Apple crowd. That’s because without an iPhone it’s of very little use and therein the Watch signifies a departure for Apple.

First impressions: this thing is beautifully built. And whether it’s the NZ$600 Watch or the sublimely ridiculous $30,000 version, its poweered by exactly the same internals, and that goes for the slimmer-line 38mm or the larger 42mm version, too. There is no difference in speeds or operations between versions whatsoever, so do please take note. I’d get the cheapest and a couple of straps; with this quick-change accessory, you have a Watch to suit for every occasion.

Strap yourself in
Apple has put a lot of effort into the straps. The aluminium one, for example, is hand-brushed and designed to not snag your wrist hairs. Beautiful design comes at a cost though: it will set you back NZ$789/A$679!

That’s more than the cheapest Watch itself.

The Sport Band (NZ$89/A$79, available in green pink, white, blue, black and dark grey) at first glance, looks like a typical rubbery-plastic work-band material, but it’s not: it’s made from fluoroelastomer and has an easily adjustable pin-and-tuck enclosure. The Classic Buckle, meanwhile, is made from Dutch leather milled with a subtle texture – it has a stainless steel buckle (NZ$289/A$229). Some high-tech has been added to bands, too: the Leather Loop, which only fits the larger Watch, is a band of Venezia leather cells, each containing a magnet so that it latches to itself with surprising strength (NZ$289/A$229). The Milanese Loop is a high-tech-looking woven stainless steel mesh (NZ$289/A$229).

There is such a variety of bands, Apple recommends going into a store and having a decent look-and-feel: in New Zealand, that’s only possible at Noel Leeming Wairau Park and Queen Street in Auckland, and Noel Leeming in Tory Street in Wellington. However, in Australia, check it out in all the proper Apple Stores. That said, the website does try and answer all your questions and it’s definitely worth a look.

Unisex wrist bling
One thing I appreciate is that Apple doesn’t make a male and female version. There is a smaller and a larger Watch and that’s it – some guys will prefer the smaller, some women the larger. It’s all about personal choice and comfort. Likewise the bands aren’t gendered. Phew! Anyone would think we were in the 21st Century. And it’s about time.

Searching for deeper meaning
But what is Apple actually doing with this most personal of devices? It’s quite a departure. If you’re one of those who think Apple is a closed loop, walled garden or private party, prepare to have your opinion reinforced.

Basically, it’s a remote controller for iPhone – the heavy processor lifting is done there, rather than on the watch, which doesn’t even have its own GPS. When your phone rings, you can answer it on your wrist. You don’t even have to go all Get Smart – when driving, for example, tap the Watch face to answer and easily drive with your hand on the wheel and chat – there’s a little speaker and mic in the side of the casing.

An optician friend pointed out that it’s really for the under 45s, as most people after that age require reading glasses. If that’s you, opt for the larger model.

Is the traditional Swiss under fire?
Does it replace a traditional watch? Well, no. The time of 3:30 is 3:30 whether you’re looking at a Swatch or a Rolex – except with the Apple Watch, you have several faces to choose from, and most of those are customisable: choose the face and, in some instances, the colour, and add various date formats, outside temperature, time in another city and more. Each ‘face’ is a little info centre.

You can buy a traditional watch for less. You can get super-waterproof ones. You get ones that go 20 years and still run without becoming obsolete.

Yet traditional watch sales, according to one report, dipped 14 per cent in June.

What happens with what comes next
What will Watch sales look like when Watch 2 comes out and all those who dropped hundreds on the first iteration get that sinking ‘I need to upgrade’ feeling?

Before getting too cynical, many have way more disposable income than I do. For the busy person, being able to access many iPhone functions on your wrist will be nothing but a boon and well worth the sticker price – no more scrabbling in your bag or shuffling about trying to grab your iPhone out of your pocket for a surprising number of functions.

The device, down to the straps, is impressively well built. It is genuinely useful. This is no flimsy geegaw. It’s a very classy product. Apple has taken the first major step away from simplified product lines into a world of choice.

But the real utility lies in ease of use for the busy person, and the ‘quantified self’ features which monitor exercise and body outputs. It’s these two areas which will most likely prove the Apple Watch a lasting product line (or not).